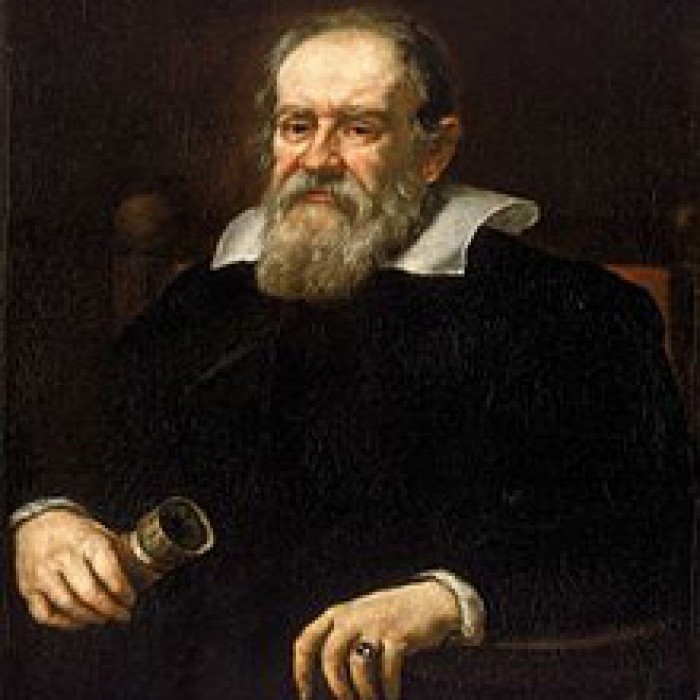 He played a major role in the scientific revolution of the seventeenth century.

His contributions to observational astronomy include the telescopic confirmation of the phases of Venus, the discovery of the four largest satellites of Jupiter, and the observation and analysis of sunspots.

Galileo also worked in applied science and technology, inventing an improved military compass and other instruments.

Galileo's championing of heliocentrism and Copernicanism was controversial during his lifetime, when most subscribed to either geocentrism or the Tychonic system.

He met with opposition from astronomers, who doubted heliocentrism because of the absence of an observed stellar parallax.

The matter was investigated by the Roman Inquisition in 1615, which concluded that heliocentrism was "foolish and absurd in philosophy, and formally heretical since it explicitly contradicts in many places the sense of Holy Scripture."

Galileo later defended his views in Dialogue Concerning the Two Chief World Systems, which appeared to attack Pope Urban VIII and thus alienated him and the Jesuits, who had both supported Galileo up until this point.

He was tried by the Inquisition, found "vehemently suspect of heresy", and forced to recant. He spent the rest of his life under house arrest.

While under house arrest, he wrote one of his best-known works, Two New Sciences, in which he summarized work he had done some forty years earlier on the two sciences now called kinematics and strength of materials.

Galileo was born in Pisa (then part of the Duchy of Florence), Italy, on 15 February 1564.

Galileo became an accomplished lutenist himself and would have learned early from his father a scepticism for established authority.

When Galileo Galilei was eight, his family moved to Florence, but he was left with Jacopo Borghini for two years.

He then was educated in the Camaldolese Monastery at Vallombrosa, 35 km southeast of Florence.

Although Galileo seriously considered the priesthood as a young man, at his father's urging he instead enrolled at the University of Pisa for a medical degree.

In 1581, when he was studying medicine, he noticed a swinging chandelier, which air currents shifted about to swing in larger and smaller arcs.

Galileo had deliberately been kept away from mathematics, since a physician earned a higher income than a mathematician.

However, after accidentally attending a lecture on geometry, he talked his reluctant father into letting him study mathematics and natural philosophy instead of medicine.

He created a thermoscope, a forerunner of the thermometer, and in 1586 published a small book on the design of a hydrostatic balance he had invented.

Galileo also studied disegno, a term encompassing fine art, and in 1588 obtained the position of instructor in the Accademia delle Arti del Disegno in Florence, teaching perspective and chiaroscuro.

While a young teacher at the Accademia, he began a lifelong friendship with the Florentine painter Cigoli, who included Galileo's lunar observations in one of his paintings.

In 1589, he was appointed to the chair of mathematics in Pisa. In 1591, his father died, and he was entrusted with the care of his younger brother Michelagnolo.

In 1592, he moved to the University of Padua where he taught geometry, mechanics, and astronomy until 1610.

During this period, Galileo made significant discoveries in both pure fundamental science as well as practical applied science.

His multiple interests included the study of astrology, which at the time was a discipline tied to the studies of mathematics and astronomy.

Galileo considered his theory of the tides to provide the required physical proof of the motion of the earth. This theory was so important to him that he originally intended to entitle his Dialogue on the Two Chief World Systems the Dialogue on the Ebb and Flow of the Sea.

In 1619, Galileo became embroiled in a controversy with Father Orazio Grassi, professor of mathematics at the Jesuit Collegio Romano.

Galileo and Guiducci offered no definitive theory of their own on the nature of comets although they did present some tentative conjectures that are now known to be mistaken.

Galileo's dispute with Grassi permanently alienated many of the Jesuits who had previously been sympathetic to his ideas, and Galileo and his friends were convinced that these Jesuits were responsible for bringing about his later condemnation.

Galileo defended heliocentrism based on his astronomical observations of 1609.

By 1615 Galileo's writings on heliocentrism had been submitted to the Roman Inquisition by Father Niccolo Lorini, who claimed that Galileo and his followers were attempting to reinterpret the Bible.

For the next decade, Galileo stayed well away from the controversy. He revived his project of writing a book on the subject, encouraged by the election of Cardinal Maffeo Barberini as Pope Urban VIII in 1623.

Galileo had alienated one of his biggest and most powerful supporters, the Pope, and was called to Rome to defend his writings in September 1632.

In view of Galileo's rather implausible denial that he had ever held Copernican ideas after 1616 or ever intended to defend them in the Dialogue, his final interrogation, in July 1633.

Galileo continued to receive visitors until 1642, when, after suffering fever and heart palpitations, he died on 8 January 1642, aged 77.

Galileo made original contributions to the science of motion through an innovative combination of experiment and mathematics.

Galileo was one of the first modern thinkers to clearly state that the laws of nature are mathematical.

In The Assayer he wrote "Philosophy is written in this grand book, the universe ... It is written in the language of mathematics, and its characters are triangles, circles, and other geometric figures ...”

Galileo showed a modern appreciation for the proper relationship between mathematics, theoretical physics, and experimental physics.

On 7 January 1610, Galileo observed with his telescope what he described at the time as "three fixed stars, totally invisible by their smallness", all close to Jupiter, and lying on a straight line through it.

On 10 January, Galileo noted that one of them had disappeared, an observation which he attributed to its being hidden behind Jupiter.

Within a few days, he concluded that they were orbiting Jupiter: he had discovered three of Jupiter's four largest moons.

He discovered the fourth on 13 January. Galileo named the group of four the Medicean stars, in honour of his future patron, Cosimo II de' Medici, Grand Duke of Tuscany, and Cosimo's three brothers.

From September 1610, Galileo observed that Venus exhibited a full set of phases similar to that of the Moon.

In 1623, Galileo published The Assayer—Il Saggiatore, which attacked theories based on Aristotle's authority and promoted experimentation and the mathematical formulation of scientific ideas.

Galileo published a description of sunspots in 1613 entitled Letters on Sunspots suggesting the Sun and heavens are corruptible.

Galileo's 1610 The Starry Messenger (Sidereus Nuncius) was the first scientific treatise to be published based on observations made through a telescope.

The concept now named Galileo's paradox was not original with him. His proposed solution, that infinite numbers cannot be compared, is no longer considered useful.

In 1609, Galileo was, along with Englishman Thomas Harriot and others, among the first to use a refracting telescope as an instrument to observe stars, planets or moons.

In about 1593, Galileo constructed a thermometer, using the expansion and contraction of air in a bulb to move water in an attached tube.

Galileo made a number of contributions to what is now known as engineering, as distinct from pure physics.

Between 1595 and 1598, Galileo devised and improved a Geometric and military compass suitable for use by gunners and surveyors.

Galileo observed the Milky Way, previously believed to be nebulous, and found it to be a multitude of stars packed so densely that they appeared from Earth to be clouds.

Galileo also observed the planet Neptune in 1612. It appears in his notebooks as one of many unremarkable dim stars.

Galileo observed the planet Saturn, and at first mistook its rings for planets, thinking it was a three-bodied system.

In 2009, the Galileoscope was also released. This is a mass-produced, low-cost educational 2-inch (51 mm) telescope with relatively high quality.

Galileo Galilei was recently selected as a main motif for a high value collectors' coin: the €25 International Year of Astronomy commemorative coin, minted in 2009.

Galileo is mentioned several times in the "opera" section of the Queen song, "Bohemian Rhapsody".

Asteroid 697 Galilea is named in his honour.

According to Stephen Hawking, Galileo probably bears more of the responsibility for the birth of modern science than anybody else, and Albert Einstein called him the father of modern science.

In March 2008 the head of the Pontifical Academy of Sciences, Nicola Cabibbo, announced a plan to honour Galileo by erecting a statue of him inside the Vatican walls.