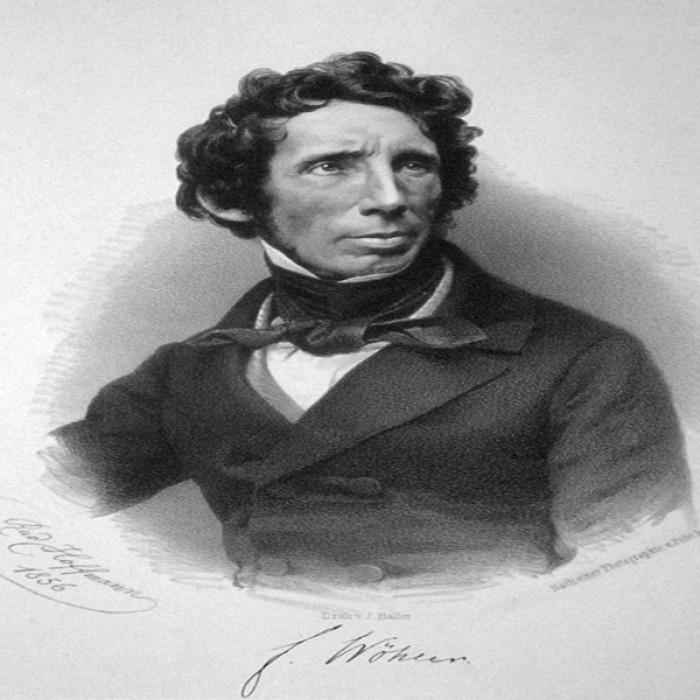 Friedrich Wöhler (31 July 1800 – 23 September 1882) was a German chemist, best known for his synthesis of urea, but also the first to isolate several chemical elements.

He was born in Eschersheim, which belonged to Hanau at the time but is nowadays a district of Frankfurt am Main.

In 1823 Wöhler finished his study of medicine in Heidelberg at the laboratory of Leopold Gmelin, who arranged for him to work under Jöns Jakob Berzelius in Stockholm, Sweden.

Afterwards, he became Ordinary Professor of Chemistry in the University of Göttingen, where he remained until his death in 1882.

In 1834, he was elected a foreign member of the Royal Swedish Academy of Sciences.

Wöhler is regarded as a pioneer in organic chemistry as a result of his (accidentally) synthesizing urea from ammonium cyanate in the Wöhler synthesis in 1828.

This discovery has become celebrated as a refutation of vitalism, the hypothesis that living things are alive because of some special "vital force".

Wöhler was also known for being a co-discoverer of beryllium, silicon and silicon nitride, as well as the synthesis of calcium carbide, among others.

In 1834, Wöhler and Justus Liebig published an investigation of the oil of bitter almonds.

They proved by their experiments that a group of carbon, hydrogen, and oxygen atoms can behave like an element, take the place of an element, and be exchanged for elements in chemical compounds.

Wöhler and Sainte Claire Deville discovered the crystalline form of boron, and Wöhler and Heinrich Buff discovered silane in 1857.

Wöhler also prepared urea, a constituent of urine, from ammonium cyanate in the laboratory without the help of a living cell.

Wöhler's discoveries had great influence on the theory of chemistry. Wöhler had several students who became notable chemists.