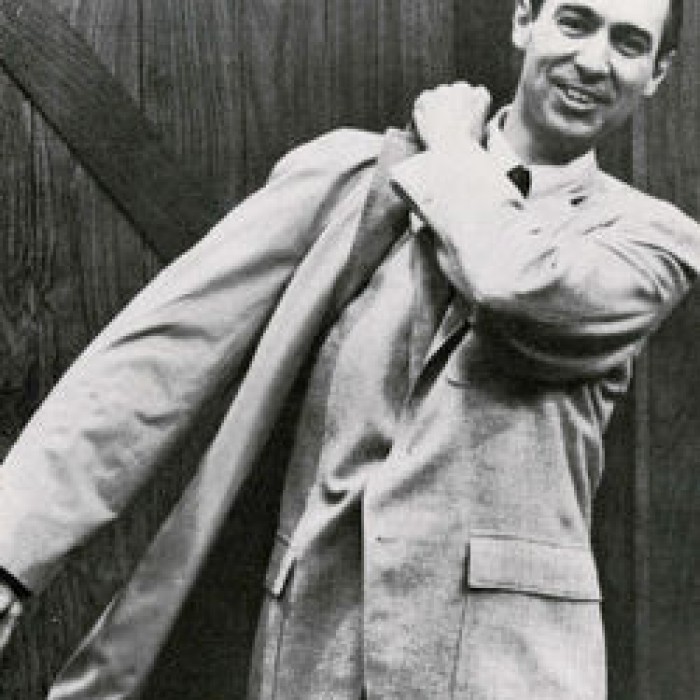 Fred McFeely Rogers (March 20, 1928 – February 27, 2003) was an American television personality, famous for creating, hosting, and composing the theme music for the educational preschool television series Mister Rogers' Neighborhood (1968–2001), which featured his kind-hearted, gentle, soft-spoken personality, and directness to his audiences.

Initially educated to be a minister, Rogers was displeased with the way television addressed children and made an effort to change this when he began to write for and perform on local Pittsburgh-area shows dedicated to youth. WQED developed his own show in 1968 and it was distributed nationwide by Eastern Educational Television Network.

Rogers received the Presidential Medal of Freedom, some forty honorary degrees, and a Peabody Award. He was inducted into the Television Hall of Fame, was recognized by two Congressional resolutions, and was ranked No. 35 among TV Guide's Fifty Greatest TV Stars of All Time.Several buildings and artworks in Pennsylvania are dedicated to his memory, and the Smithsonian Institution displays one of his trademark sweaters as a "Treasure of American History".

Rogers was born in Latrobe, Pennsylvania, 40 miles (65 km) southeast of Pittsburgh, to James and Nancy Rogers; he had one sister, Elaine. Early in life, he spent much of his free time with his maternal grandfather, Fred McFeely, who had an interest in music. He would often sing along as his mother would play the piano, and he himself began playing at five.

Fred Rogers had a life-changing moment when he first saw television in his parents' home. He entered seminary after college; but, after his first experience as a viewer, he wanted to explore the potential of the medium. In an interview with CNN in his later years, Rogers stated, "I went into television because I hated it so, and I thought there's some way of using this fabulous instrument to nurture those who would watch and listen."

In 1994, Rogers created another one-time special for PBS called Fred Rogers' Heroes which consisted of documentary portraits of four real-life people whose work helped make their communities better. Rogers, uncharacteristically dressed in a suit and tie, hosted in wraparound segments which did not use the "Neighborhood" set.

For a time, Rogers produced specials for parents as a precursor to the subject of the week on the Neighborhood called "Mister Rogers Talks To Parents About [topic]". Rogers didn't host those specials, but instead, invited news announcers, such as Joan Lunden (who hosted the Conflict special), to take on the emcee duties in front of a gallery of parents while Rogers answered questions from them. These specials were made to prepare parents for questions their children might ask after watching the episodes on the topic of the week.

On New Year's Day 2004, Michael Keaton, who had been a stagehand on Mister Rogers' Neighborhood before becoming an actor, hosted the PBS TV special Fred Rogers: America's Favorite Neighbor. It was released on DVD September 28 that year.

To mark what would have been his 80th birthday, Rogers' production company sponsored several events to memorialize him, including "Won't You Wear a Sweater Day", during which fans and neighbors were asked to wear their favorite sweaters in celebration. The event takes place annually on his birthday, March 20.

Rogers received the Ralph Lowell Award in 1975. The television industry honored Rogers with a George Foster Peabody Award "in recognition of 25 years of beautiful days in the neighborhood" in 1992; previously, he had shared a Peabody award for Mister Rogers' Neighborhood in 1968. Also in 1992, he was initiated as an honorary member of Phi Mu Alpha Sinfonia Fraternity, the national fraternity for men of music.

Rogers was a National Patron of Delta Omicron, an international professional music fraternity. He was inducted into the Television Hall of Fame in 1999. One of Rogers' iconic sweaters was acquired by the Smithsonian Institution, which displays it as a "Treasure of American History". In 2002, Rogers received the PNC Commonwealth Award in Mass Communications.