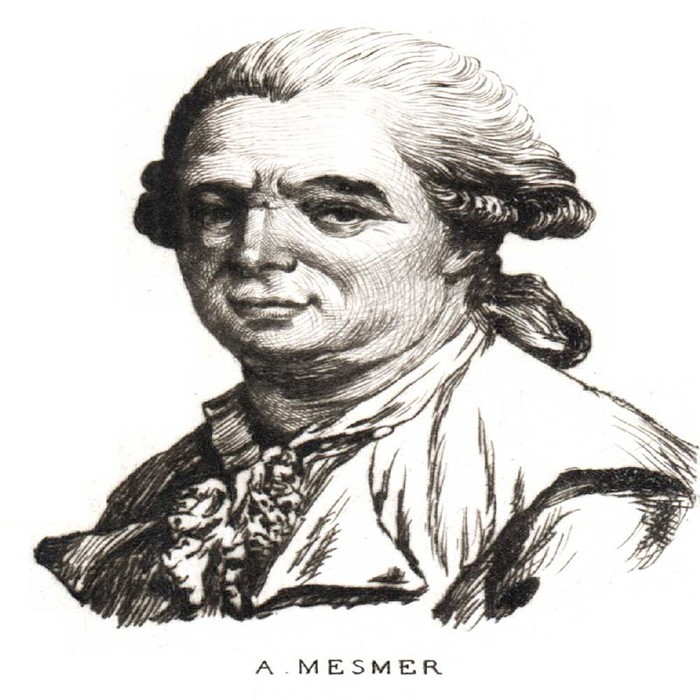 He theorised that there was a natural energetic transference that occurred between all animated and inanimate objects that he called animal magnetism, sometimes later referred to as mesmerism.

The theory attracted a wide following between about 1780 and 1850, and continued to have some influence until the end of the century.

In 1843 the Scottish physician James Braid proposed the term hypnosis for a technique derived from animal magnetism; today this is the usual meaning of mesmerism.

Mesmer was born in the village of Iznang, on the shore of Lake Constance in Swabia, Germany, a son of master forester Anton Mesmer and his wife, Maria/Ursula.

After studying at the Jesuit universities of Dillingen and Ingolstadt, he took up the study of medicine at the University of Vienna in 1759.

Building largely on Newton's theory of the tides, Mesmer expounded on certain tides in the human body that might be accounted for by the movements of the sun and moon.

Evidence assembled by Frank A. Pattie suggests that Mesmer plagiarized a part of his dissertation from a work by Richard Mead, an eminent English physician and Newton's friend.

In January 1768, Mesmer married Anna Maria von Posch, a wealthy widow, and established himself as a physician in the Austrian capital Vienna.

In the summers he lived on a splendid estate and became a patron of the arts.

In 1768, when court intrigue prevented the performance of La finta semplice (K. 51), for which the twelve-year-old Wolfgang Amadeus Mozart had composed 500 pages of music.

Mesmer is said to have arranged a performance in his garden of Mozart's Bastien und Bastienne (K. 50), a one-act opera, though Mozart's biographer Nissen has stated that there is no proof that this performance actually took place.

Mozart later immortalized his former patron by including a comedic reference to Mesmer in his opera Così fan tutte.

In 1774, Mesmer produced an "artificial tide" in a patient, Francisca Osterlin, who suffered from hysteria, by having her swallow a preparation containing iron and then attaching magnets to various parts of her body.

In 1775, Mesmer was invited to give his opinion before the Munich Academy of Sciences on the exorcisms carried out by Johann Joseph Gassner (Gaßner), a priest and healer who grew up in Vorarlberg, Austria.

Mesmer said that while Gassner was sincere in his beliefs, his cures resulted because he possessed a high degree of animal magnetism.

In February 1778 Mesmer moved to Paris, rented an apartment in a part of the city preferred by the wealthy and powerful, and established a medical practice.

In his first years in Paris, Mesmer tried and failed to get either the Royal Academy of Sciences or the Royal Society of Medicine to provide official approval for his doctrines.

In 1779, with d'Eslon's encouragement, Mesmer wrote an 88-page book, Mémoire sur la découverte du magnétisme animal, to which he appended his famous 27 Propositions.

In August 1784 Mesmer visited a Mesmeric society in Lyon. In 1785 Mesmer left Paris.

In 1790 he was in Vienna again to settle the estate of his deceased wife Maria Anna. When he sold his house in Vienna in 1801 he was in Paris.

Mesmer continued to practice in Frauenfeld, Switzerland for a number of years and died in 1815 in Meersburg, Germany.