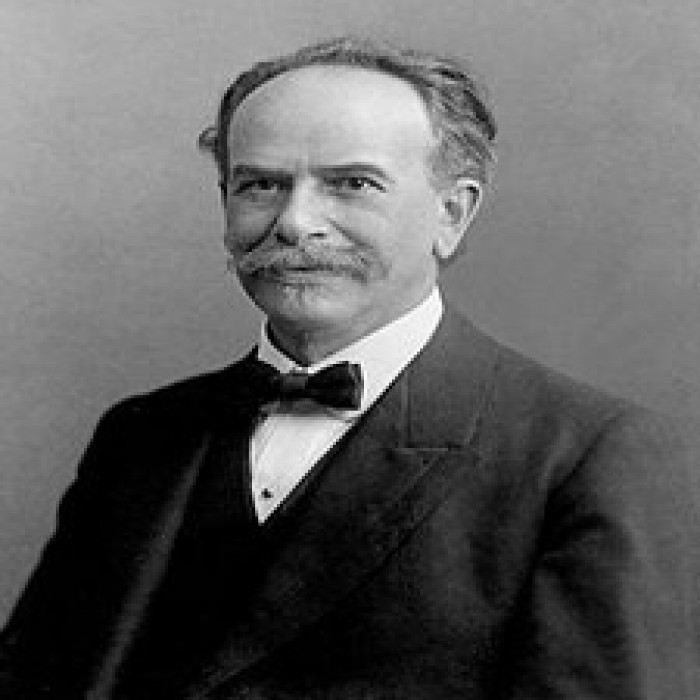 Franz Uri Boas (July 9, 1858 – December 21, 1942) was a German-American anthropologist and a pioneer of modern anthropology who has been called the "Father of American Anthropology".

His work is associated with the movement of anthropological historicism.

Studying in Germany, Boas was awarded a doctorate in 1881 in physics while also studying geography.

He then participated in a geographical expedition to northern Canada where he became fascinated with the culture and language of the Baffin Island Inuit.

In 1887 he emigrated to the United States where he first worked as a museum curator at the Smithsonian, and in 1899 became professor of anthropology at Columbia University where he remained for the rest of his career.

Through his students, many of whom went on to found anthropology departments and research programmes inspired by their mentor, Boas profoundly influenced the development of American anthropology.

Boas was one of the most prominent opponents of the then popular ideologies of scientific racism, the idea that race is a biological concept and that human behavior is best understood through the typology of biological characteristics.

Boas also worked to demonstrate that differences in human behavior are not primarily determined by innate biological dispositions, but are largely the result of cultural differences acquired through social learning.

In this way, Boas introduced culture as the primary concept for describing differences in behavior between human groups, and as the central analytical concept of anthropology.

Among Boas's main contributions to anthropological thought was his rejection of the then popular evolutionary approaches to the study of culture, which saw all societies progressing through a set of hierarchic technological and cultural stages.

Boas argued that culture developed historically through the interactions of groups of people and the diffusion of ideas, and that consequently there was no process towards continuously "higher" cultural forms.

Boas also introduced the ideology of cultural relativism which holds that cultures cannot be objectively ranked as higher or lower, or better or more correct, but that all humans see the world through the lens of their own culture, and judge it according to their own culturally acquired norms.

Boas created the four field subdivision of anthropology which became prominent in American anthropology in the 20th century.

Franz Boas was born in Minden, Westphalia. Although his grandparents were observant Jews, his parents embraced Enlightenment values, including their assimilation into modern German society.

Early in life he displayed a penchant for both nature and natural sciences. Boas vocally opposed anti-Semitism and refused to convert to Christianity, but he did not identify himself as a Jew.

From kindergarten on, Boas was educated in natural history, a subject he enjoyed. In gymnasium, he was most proud of his research on the geographic distribution of plants.

When he started his university studies, Boas first attended Heidelberg University for a semester followed by four terms at Bonn University, studying physics, geography, and mathematics at these schools.

In 1879, he hoped to transfer to Berlin University to study physics under Hermann von Helmholtz, but ended up transferring to the University of Kiel instead due to family reasons.

At Kiel, Boas studied under Theobald Fischer and received a doctorate in physics in 1881 for his dissertation entitled "Contributions to the Understanding of the Color of Water".

Boas took up geography as a way to explore his growing interest in the relationship between subjective experience and the objective world.

In 1896, Boas was appointed Assistant Curator of Ethnology and Somatology of the American Museum of Natural History under Putnam.

In 1897, he organized the Jesup North Pacific Expedition, a five-year-long field-study of the natives of the Pacific Northwest, whose ancestors had migrated across the Bering Strait from Siberia.

Boas also contributed greatly to the foundation of linguistics as a science in the United States.

He published many descriptive studies of Native American languages, and wrote on theoretical difficulties in classifying languages, and laid out a research program for studying the relations between language and culture.

Franz Boas was an immensely influential figure throughout the development of folklore as a discipline.

Boas remained active in the development and scholarship of folklore throughout his life. He became the editor of the Journal of American Folklore in 1908.

Franz Boas died of a stroke at the Columbia University Faculty Club on December 21, 1942 in the arms of Claude Lévi-Strauss.

By that time he had become one of the most influential and respected scientists of his generation.

In his 1963 book, Race: The History of an Idea in America, Thomas Gossett wrote that "It is possible that Boas did more to combat race prejudice than any other person in history."