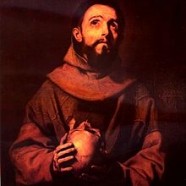 Saint Francis of Assisi (Italian: San Francesco d'Assisi), born Giovanni di Pietro di Bernardone, informally named as Francesco (1181/1182 – 3 October 1226),was an ItalianRoman Catholic friar and preacher. He founded the men's Order of Friars Minor, the women’s Order of Saint Clare, the Third Order of Saint Francisand the Custody of the Holy Land.Francis is one of the most venerated religious figures in history.

Pope Gregory IX canonised Francis on 16 July 1228. Along with Saint Catherine of Siena, he was designatedPatron saint of Italy. He later became associated with patronage of animals and the natural environment, and it became customary for Catholic and Anglican churches to hold ceremonies blessing animals on his feast day of 4 October.