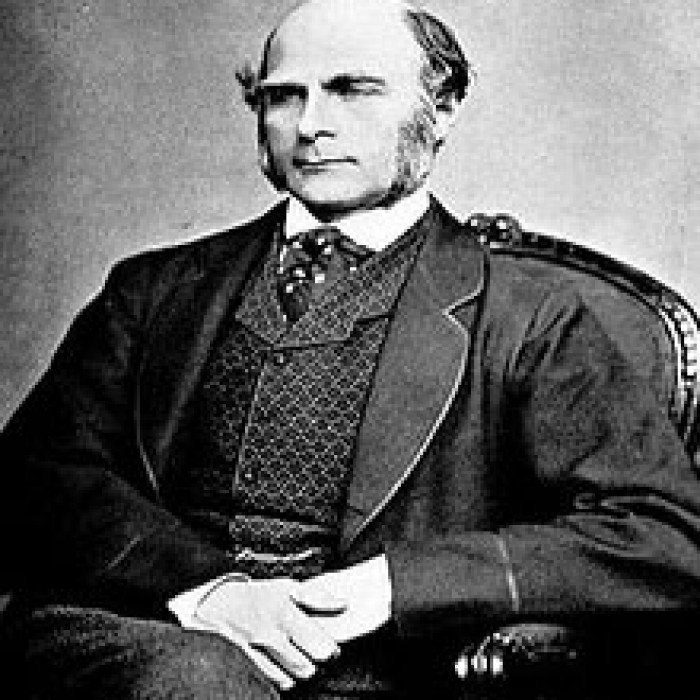 Galton produced over 340 papers and books. He also created the statistical concept of correlation and widely promoted regression toward the mean.

He was the first to apply statistical methods to the study of human differences and inheritance of intelligence, and introduced the use of questionnaires and surveys for collecting data on human communities, which he needed for genealogical and biographical works and for his anthropometric studies.

He was a pioneer in eugenics, coining the term itself and the phrase "nature versus nurture".

His book Hereditary Genius (1869) was the first social scientific attempt to study genius and greatness.

As an investigator of the human mind, he founded psychometrics (the science of measuring mental faculties) and differential psychology and the lexical hypothesis of personality.

He devised a method for classifying fingerprints that proved useful in forensic science.

He also conducted research on the power of prayer, concluding it had none by its null effects on the longevity of those prayed for.

His quest for the scientific principles of diverse phenomena extended even to the optimal method for making tea.

As the initiator of scientific meteorology, he devised the first weather map, proposed a theory of anticyclones, and was the first to establish a complete record of short-term climatic phenomena on a European scale

He also invented the Galton Whistle for testing differential hearing ability. He was Charles Darwin's half-cousin.

Galton was born at "The Larches", a large house in the Sparkbrook area of Birmingham, England, built on the site of "Fair Hill", the former home of Joseph Priestley, which the botanist William Withering had renamed.

Galton was by many accounts a child prodigy – he was reading by the age of two; at age five he knew some Greek, Latin and long division, and by the age of six he had moved on to adult books, including Shakespeare for pleasure, and poetry, which he quoted at length.

Galton attended King Edward's School, Birmingham, but chafed at the narrow classical curriculum and left at 16.

According to the records of the United Grand Lodge of England, it was in February 1844 that Galton became a freemason at the so-called Scientific lodge, held at the Red Lion Inn in Cambridge.

One of Galton's masonic certificates from Scientific lodge can be found among his papers at University College, London.

In his early years Galton was an enthusiastic traveller, and made a notable solo trip through Eastern Europe to Constantinople, before going up to Cambridge.

In 1845 and 1846 he went to Egypt and travelled down the Nile to Khartoum in the Sudan, and from there to Beirut, Damascus and down the Jordan.

In 1850 he joined the Royal Geographical Society, and over the next two years mounted a long and difficult expedition into then little-known South West Africa (now Namibia).

He wrote a successful book on his experience, "Narrative of an Explorer in Tropical South Africa".

He proceeded to write the best-selling The Art of Travel, a handbook of practical advice for the Victorian on the move, which went through many editions and is still in print.

Galton prepared the first weather map published in The Times (1 April 1875, showing the weather from the previous day, 31 March), now a standard feature in newspapers worldwide.

He also discovered the properties of the bivariate normal distribution and its relationship to regression analysis.

Galton invented the use of the regression line and for the choice of r (for reversion or regression) to represent the correlation coefficient.

In the 1870s and 1880s he was a pioneer in the use of normal theory to fit histograms to actual tabulated data, much of which he collected himself: for instance large samples of sibling and parental height.

Galton was the first to describe and explain the common phenomenon of regression toward the mean, which he first observed in his experiments on the size of the seeds of successive generations of sweet peas.

Over the course of his career Galton received many major awards, including the Copley Medal of the Royal Society (1910).

He was elected a member of the prestigious Athenaeum Club in 1855 and made a Fellow of the Royal Society in 1860.

The flowering plant genus Galtonia was named in his honour.