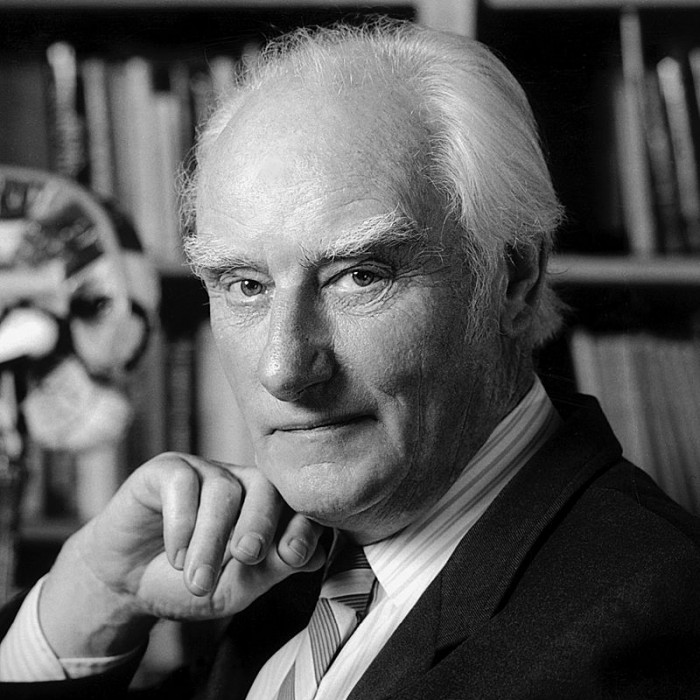 He is the most noted for being a co-discoverer of the structure of the DNA molecule in 1953 with James Watson.

Together with Watson and Maurice Wilkins, he was jointly awarded the 1962 Nobel Prize in Physiology or Medicine "for their discoveries concerning the molecular structure of nucleic acids and its significance for information transfer in living material".

Crick was an important theoretical molecular biologist and played a crucial role in research related to revealing the helical structure of DNA.

He is widely known for use of the term "central dogma" to summarize the idea that genetic information flow in cells is essentially one-way, from DNA to RNA to protein.

During the remainder of his career, he held the post of J.W. Kieckhefer Distinguished Research Professor at the Salk Institute for Biological Studies in La Jolla, California.

His later research centered on theoretical neurobiology and attempts to advance the scientific study of human consciousness.

He remained in this post until his death; "he was editing a manuscript on his death bed, a scientist until the bitter end" according to Christof Koch.

He was born and raised in Weston Favell, then a small village near the English town of Northampton, in which Crick’s father and uncle ran the family’s boot and shoe factory.

At an early age, Francis was attracted to science and what he could learn about it from books. As a child, he was taken to church by his parents.

But by about age 12, he said he did not want to go anymore, as he preferred a scientific search for answers over religious belief.

When he was eight or nine he transferred to the most junior form of the Northampton Grammar School, on the Billing Road.

After the age of 14, he was educated at Mill Hill School in London (on scholarship), where he studied mathematics, physics, and chemistry with his best friend John Shilston.

He shared the Walter Knox Prize for Chemistry on Mill Hill School's Foundation Day, Friday, 7 July 1933. He declared that his success was inspired by the quality of teaching he received whilst a pupil at Mill Hill.

At the age of 21, Crick earned a Bachelor of Science degree in physics from University College London. Crick had failed to gain a place at a Cambridge college, probably through failing their requirement for Latin.

He later became a PhD student and Honorary Fellow of Gonville and Caius College, Cambridge and mainly worked at the Cavendish Laboratory and the Medical Research Council (MRC) Laboratory of Molecular Biology in Cambridge.

He was also an Honorary Fellow of Churchill College, Cambridge and of University College, London.

During his second year as a PhD student, however, he was awarded the Carey Foster Research Prize, a great honour. He did postdoctoral work at the Polytechnic Institute of Brooklyn.

During World War II, he worked for the Admiralty Research Laboratory, from which emerged a group of many notable scientists, including David Bates, Robert Boyd, George Deacon, John Gunn, Harrie Massey, and Nevill Mott.

He worked on the design of magnetic and acoustic mines, and was instrumental in designing a new mine that was effective against German minesweepers.

In 1947, aged 31, Crick began studying biology and became part of an important migration of physical scientists into biology research.

He married twice, fathered three children and was the grandfather of six grandchildren; his brother Anthony (born in 1918) predeceased him in 1966.

Crick died of colon cancer on the morning of 28 July 2004 at the University of California, San Diego (UCSD) Thornton Hospital in La Jolla; he was cremated and his ashes were scattered into the Pacific Ocean.

Crick was interested in two fundamental unsolved problems of biology: how molecules make the transition from the non-living to the living, and how the brain makes a conscious mind.

In 1951 and 1952, together with William Cochran and Vladimir Vand, Crick assisted in the development of a mathematical theory of X-ray diffraction by a helical molecule.

In 1956, Crick and Watson speculated on the structure of small viruses. They suggested that spherical viruses such as Tomato bushy stunt virus had icosahedral symmetry and were made from 60 identical subunits.

Crick referred to himself as a humanist, which he defined as the belief "that human problems can and must be faced in terms of human moral and intellectual resources without invoking supernatural authority."

In his book Of Molecules and Men, Crick expressed his views on the relationship between science and religion.

In 1960, Crick accepted an honorary fellowship at Churchill College, Cambridge, one factor being that the new college did not have a chapel.

In 2003 he was one of 22 Nobel laureates who signed the Humanist Manifesto.

During the 1960s, Crick became concerned with the origins of the genetic code. In 1966, Crick took the place of Leslie Orgel at a meeting where Orgel was to talk about the origin of life.

In addition to his third share of the 1962 Nobel prize for Physiology or Medicine, he received many awards and honours, including the Royal and Copley medals of the Royal Society (1972 and 1975), and also the Order of Merit (on 27 November 1991).