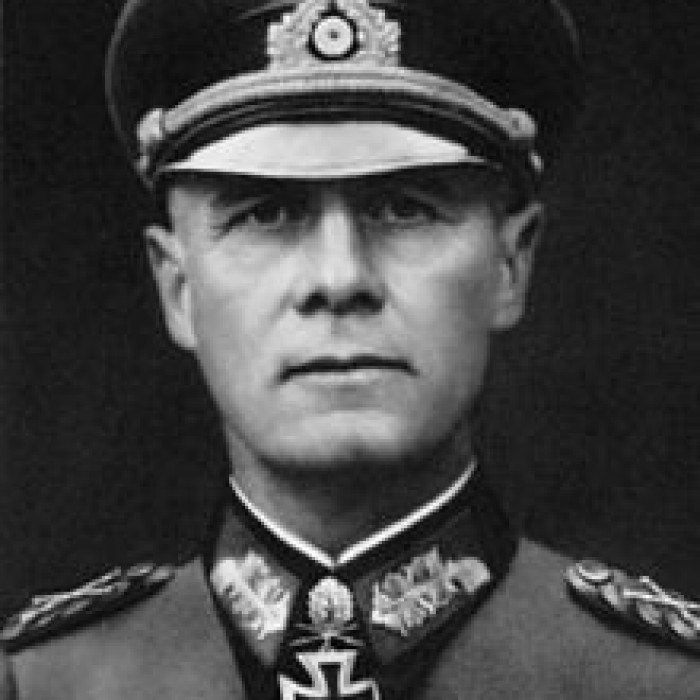 Rommel was a highly decorated officer in World War I and was awarded the Pour le Mérite for his actions on the Italian Front. In World War II, he distinguished himself as the commander of the 7th Panzer Division during the 1940 invasion of France.

His leadership of German and Italian forces in the North African Campaign established his reputation as one of the most able tank commanders of the war, and earned him the nickname der Wüstenfuchs, "the Desert Fox". He later commanded the German forces opposing the Allied cross-channel invasion of Normandy in June 1944.

Rommel supported the Nazi seizure of power and Adolf Hitler, although his attitude towards Nazi ideology and level of knowledge of the regime's crimes remain a matter of debate among scholars.

In 1944, Rommel was implicated in the 20 July plot to assassinate Hitler. Due to Rommel's status as a national hero, Hitler desired to eliminate him quietly. Rommel was given a choice between committing suicide, in return for assurances that his family would not be persecuted following his death, or facing a trial that would result in his execution; he chose the former and, shortly after, committed suicide using a cyanide pill.

Rommel was given a state funeral, and it was announced that he had succumbed to his injuries from the strafing of his staff car in Normandy.

Rommel has become a larger-than-life figure in both Allied and Nazi propaganda, with numerous authors considering him an apolitical, brilliant commander and a victim of the Third Reich although this assessment is contested by other authors as the Rommel myth.

Rommel's reputation for conducting a clean war was used in the interest of the West German rearmament and reconciliation between the former enemies – the United Kingdom and the United States on one side and the new Federal Republic of Germany on the other.