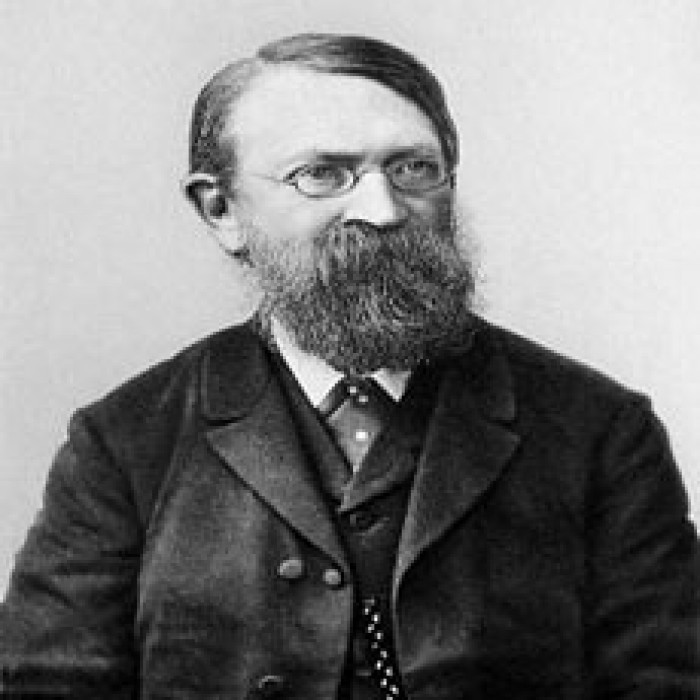 Ernst Waldfried Josef Wenzel Mach (18 February 1838 – 19 February 1916) was an Austrian physicist and philosopher, noted for his contributions to physics such as study of shock waves.

The ratio of one's speed to that of sound is named the Mach number in his honor.

As a philosopher of science, he was a major influence on logical positivism, American pragmatism and through his criticism of Newton's theories of space and time, foreshadowing Einstein's theory of relativity.

Ernst Waldfried Josef Wenzel Mach was born in Brno-Chrlice, Moravia (then in the Austrian empire, now part of Brno in the Czech Republic).

Despite his Catholic background, he later became an atheist and his theory and life is compared with Buddhism.

Up to the age of 14, Mach received his education at home from his parents. He then entered a Gymnasium in Kromeriz, where he studied for three years.

In 1855 he became a student at the University of Vienna. There he studied physics and for one semester medical physiology.

Receiving his doctorate in physics in 1860 under Andreas von Ettingshausen with a thesis titled "Über elektrische Ladungen und Induktion", and his habilitation the following year.

His early work focused on the Doppler effect in optics and acoustics.

During that period, Mach continued his work in psycho-physics and in sensory perception.

In 1867, he took the chair of Experimental Physics at the Charles University, Prague, where he stayed for 28 years before returning to Vienna.

Mach's main contribution to physics involved his description and photographs of spark shock-waves and then ballistic shock-waves.

He described how when a bullet or shell moved faster than the speed of sound, it created a compression of air in front of it.

Using schlieren photography, he and his son Ludwig were able to photograph the shadows of the invisible shock waves.

Mach also made many contributions to psychology and physiology, including his anticipation of gestalt phenomena.

His discovery of the oblique effect and of Mach bands, an inhibition-influenced type of visual illusion, and especially his discovery of a non-acoustic function of the inner ear which helps control human balance.

One of the best-known of Mach's ideas is the so-called "Mach principle," concerning the physical origin of inertia.

Mach also became well known for his philosophy developed in close interplay with his science. Mach defended a type of phenomenalism recognizing only sensations as real.

He famously declared, after an 1897 lecture by Ludwig Boltzmann at the Imperial Academy of Science in Vienna: "I don't believe that atoms exist!”

From about 1908 to 1911 Mach's reluctance to acknowledge the reality of atoms was criticized by Max Planck as being incompatible with physics.

In 1898 Mach suffered from cardiac arrest and in 1901 retired from the University of Vienna and was appointed to the upper chamber of the Austrian parliament.

On leaving Vienna in 1913 he moved to his son's home in Vaterstetten, near Munich, where he continued writing and corresponding until his death in 1916, only one day after his 78th birthday.

Most of Mach's initial studies in the field of experimental physics concentrated on the interference, diffraction, polarization and refraction of light in different media under external influences.

From 1895 to 1901, Mach held a newly created chair for "the history and philosophy of the inductive sciences" at the University of Vienna.

In his historico-philosophical studies, Mach developed a phenomenalistic philosophy of science which became influential in the 19th and 20th centuries.

In accordance with this philosophy, Mach opposed Ludwig Boltzmann and others who proposed an atomic theory of physics.

Mach is attributed with a number of principles that distill his ideal of physical theorisation—what is now called "Machian physics".

In the area of sensory perception, psychologists remember Mach for the optical illusion called Mach bands.

Mach's views on mediating structures inspired B. F. Skinner's strongly inductive position, which paralleled Mach's in the field of psychology.