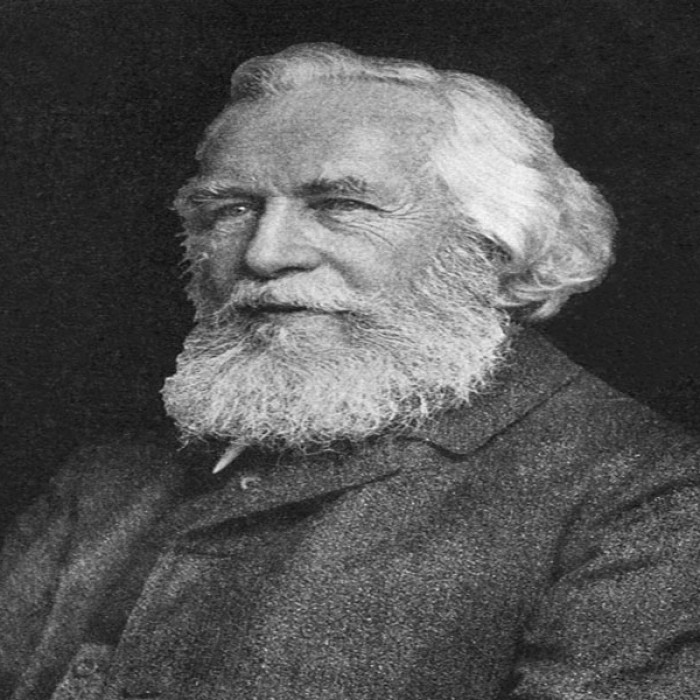 He discovered, described and named thousands of new species, mapped a genealogical tree relating all life forms, and coined many terms in biology, including anthropogeny, ecology, phylum, phylogeny, stem cell, and Protista.

Haeckel promoted and popularised Charles Darwin's work in Germany and developed the influential but no longer widely held recapitulation theory claiming that an individual organism's biological development, or ontogeny, parallels and summarises its species' evolutionary development, or phylogeny.

As a philosopher, Ernst Haeckel wrote Die Welträtsel, the genesis for the term "world riddle" (Welträtsel); and Freedom in Science and Teaching to support teaching evolution.

Ernst Haeckel was born on 16 February 1834, in Potsdam (then part of Prussia).  In 1852, Haeckel completed studies at the Domgymnasium, the cathedral high school of Merseburg.

He then studied medicine in Berlin and Würzburg, particularly with Albert von Kölliker, Franz Leydig, Rudolf Virchow, and with the anatomist-physiologist Johannes Peter Müller.

In 1857, Haeckel attained a doctorate in medicine, (M.D.), and afterwards he received a license to practice medicine.

Between 1859 and 1866, Haeckel worked on many phyla such radiolarians, poriferans (sponges) and annelids (segmented worms).

During a trip to the Mediterranean, Haeckel named nearly 150 new species of radiolarians.

From 1866 to 1867, Haeckel made an extended journey to the Canary Islands with Hermann Fol and during this period, met with Charles Darwin, in 1866 at Down House in Kent.

Haeckel retired from teaching in 1909, and in 1910 he withdrew from the Evangelical church.

He sold his "Villa Medusa" in Jena in 1918 to the Carl Zeiss foundation, and it presently contains a historic library. Haeckel died on 9 August 1919.

Haeckel's political beliefs were influenced by his affinity for the German Romantic movement coupled with his acceptance of a form of Lamarckism.

Haeckel was the first person known to use the term "First World War".

Haeckel was a zoologist, an accomplished artist and illustrator, and later a professor of comparative anatomy.

He was one of the first to consider psychology as a branch of physiology.

Haeckel also applied the hypothesis of polygenism to the modern diversity of human groups. He became a key figure in social darwinism and leading proponent of scientific racism.

Haeckel divided human beings into ten races, of which the Caucasian was the highest and the primitives were doomed to extinction.

Haeckel claimed the origin of humanity was to be found in Asia: he believed that Hindustan was the actual location where the first humans had evolved.

In Haeckel’s book The History of Creation (1884) he included migration routes which he thought the first humans had used outside of Lemuria.

When Haeckel was a student in the 1850s he showed great interest in embryology, attending the rather unpopular lectures twice and in his notes sketched the visual aids.

Haeckel's aim was a reformed morphology with evolution as the organising principle of a cosmic synthesis unifying science, religion, and art.

Later in 1874, Haeckel's simpliﬁed embryology textbook Anthropogenie made the subject into a battleground over Darwinism aligned with Bismarck's Kulturkampf against the Catholic Church.

He was awarded the title of Excellency by Kaiser Wilhelm II in 1907 and the Linnean Society of London's prestigious Darwin-Wallace Medal in 1908.

Haeckel argued that human evolution consisted of precisely 22 phases, the 21st – the "missing link" — being a halfway step between apes and humans.

Haeckel had produced 42 works with nearly 13,000 pages, besides numerous scientific memoirs and illustrations.