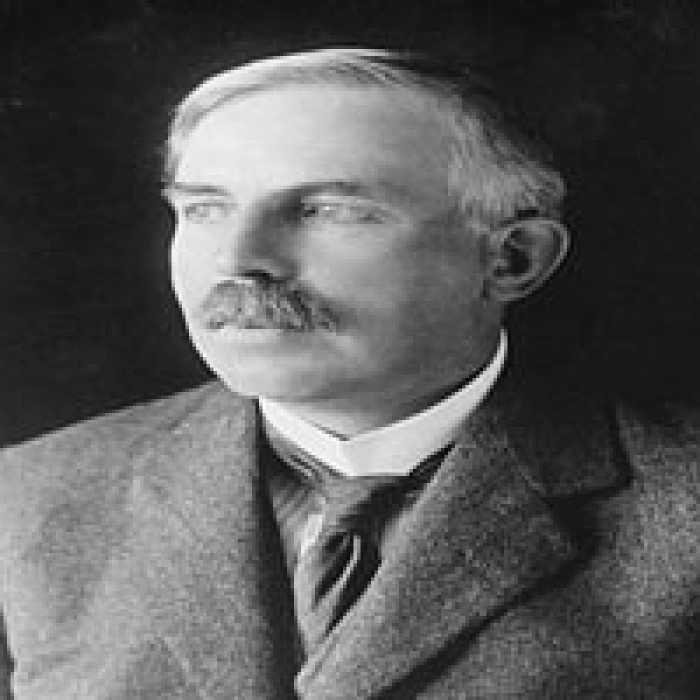 Ernest Rutherford, 1st Baron Rutherford of Nelson (30 August 1871 – 19 October 1937) was a New Zealand-born British physicist who came to be known as the father of nuclear physics.

Encyclopedia Britannica considers him to be the greatest experimentalist since Michael Faraday.

In early work, Rutherford discovered the concept of radioactive half-life, proved that radioactivity involved the nuclear transmutation of one chemical element to another, and also differentiated and named alpha and beta radiation.

It is the basis for the Nobel Prize in Chemistry he was awarded in 1908 "for his investigations into the disintegration of the elements, and the chemistry of radioactive substances".

He is the first Canadian and Oceanian Nobel laureate, and remains the only laureate born in the South Island.

In 1911, although he could not prove that it was positive or negative, he theorized that atoms have their charge concentrated in a very small nucleus, and thereby pioneered the Rutherford model of the atom.

He conducted research that led to the first "splitting" of the atom in 1917 in a nuclear reaction between nitrogen and alpha particles, in which he also discovered (and named) the proton.

Rutherford became Director of the Cavendish Laboratory at the University of Cambridge in 1919.

Under his leadership the neutron was discovered by James Chadwick in 1932 and in the same year the first experiment to split the nucleus in a fully controlled manner was performed by students working under his direction, John Cockcroft and Ernest Walton.

After his death in 1937, he was honoured by being interred with the greatest scientists of the United Kingdom, near Sir Isaac Newton's tomb in Westminster Abbey.

The chemical element rutherfordium (element 104) was named after him in 1997.

Ernest Rutherford was the son of James Rutherford, a farmer, and his wife Martha Thompson, originally from Hornchurch, Essex, England.

Ernest was born at Brightwater, near Nelson, New Zealand. His first name was mistakenly spelled 'Earnest' when his birth was registered.

He studied at Havelock School and then Nelson College and won a scholarship to study at Canterbury College, University of New Zealand.

After gaining his BA, MA and BSc, and doing two years of research during which he invented a new form of radio receiver.

In 1895 Rutherford was awarded an 1851 Research Fellowship from the Royal Commission for the Exhibition of 1851.

In 1900 he gained a DSc from the University of New Zealand. In 1907 Rutherford returned to Britain to take the chair of physics at the Victoria University of Manchester.

Rutherford was accepted, which meant that in 1900 he could marry Mary Georgina Newton (1876–1954) to whom he had become engaged before leaving New Zealand.

He was knighted in 1914. During World War I, he worked on a top secret project to solve the practical problems of submarine detection by sonar. In 1916 he was awarded the Hector Memorial Medal.

Along with Hans Geiger and Ernest Marsden in 1909, he carried out the Geiger–Marsden experiment, which demonstrated the nuclear nature of atoms by deflecting alpha particles passing through a thin gold foil.

Rutherford's research, and work done under him as laboratory director, established the nuclear structure of the atom and the essential nature of radioactive decay as a nuclear process.

Rutherford's theory of neutrons was proved in 1932 by his associate James Chadwick, who recognized neutrons immediately when they were produced by other scientists and later himself, in bombarding beryllium with alpha particles.

For some time before his death, Rutherford had a small hernia, which he had neglected to have fixed, and it became strangulated, causing him to be violently ill.

Despite an emergency operation in London, he died four days afterwards of what physicians termed "intestinal paralysis", at Cambridge.