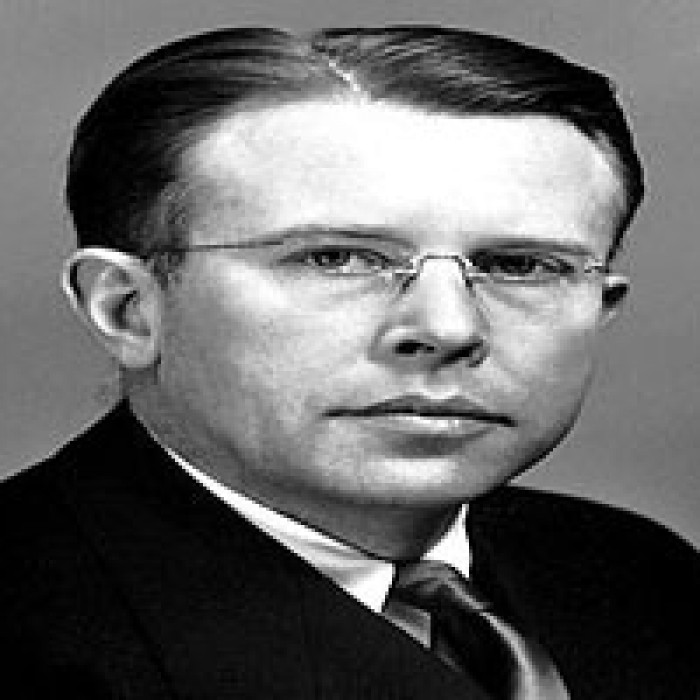 Ernest Orlando Lawrence (August 8, 1901 – August 27, 1958) was a pioneering American nuclear scientist and winner of the Nobel Prize in Physics in 1939 for his invention of the cyclotron.

In 1928, he was hired as an associate professor of physics at the University of California, becoming the youngest full professor there two years later.

In its library one evening, Lawrence was intrigued by a diagram of an accelerator that produced high-energy particles.

He contemplated how it could be made compact, and came up with an idea for a circular accelerating chamber between the poles of an electromagnet. The result was the first cyclotron.

His Radiation Laboratory became an official department of the University of California in 1936, with Lawrence as its director.

After the war, Lawrence campaigned extensively for government sponsorship of large scientific programs, and was a forceful advocate of "Big Science", with its requirements for big machines and big money.

Chemical element number 103 was named lawrencium in his honor after its discovery at Berkeley in 1961.

Lawrence attended the public schools of Canton and Pierre, then enrolled at St. Olaf College in Northfield, Minnesota, but transferred after a year to the University of South Dakota in Vermillion.

He completed his bachelor's degree in chemistry in 1922, and his Master of Arts (M.A.) degree in physics from the University of Minnesota in 1923 under the supervision of William Francis Gray Swann.

For his master's thesis, Lawrence built an experimental apparatus that rotated an ellipsoid through a magnetic field.

Lawrence followed Swann to the University of Chicago, and then to Yale University in New Haven, Connecticut, where Lawrence completed his Doctor of Philosophy (Ph.D.) degree in physics in 1925.

He was elected a member of Sigma Xi, and, on Swann's recommendation, received a National Research Council fellowship.

Lawrence was hired as an associate professor of physics at the University of California in 1928, and two years later became a full professor, becoming the university's youngest professor.

The invention that brought Lawrence to international fame started out as a sketch on a scrap of a paper napkin. While sitting in the library one evening in 1929, Lawrence glanced over a journal article by Rolf Widerøe, and was intrigued by one of the diagrams.

Lawrence was awarded the Nobel Prize in Physics in November 1939 "for the invention and development of the cyclotron and for results obtained with it, especially with regard to artificial radioactive elements".

In March 1940, Arthur Compton, Vannevar Bush, James B. Conant, Karl T. Compton, and Alfred Lee Loomis traveled to Berkeley to discuss Lawrence's proposal for a 184-inch cyclotron with a 4,500-ton magnet that was estimated to cost $2.65 million.

After the outbreak of World War II in Europe, Lawrence became drawn into military projects. He helped recruit staff for the MIT Radiation Laboratory, where American physicists developed the cavity magnetron invented by Oliphant's team in Britain.

On July 16, 1945, Lawrence observed the Trinity nuclear test of the first atomic bomb with Chadwick and Charles A. Thomas.

Lawrence hoped that the Manhattan Project would develop improved calutrons and construct Alpha III racetracks, but they were judged to be uneconomical.

After the war, Lawrence campaigned extensively for government sponsorship of large scientific programs.

He was a forceful advocate of Big Science with its requirements for big machines and big money, and in 1946 he asked the Manhattan Project for over $2 million for research at the Radiation Laboratory.

Lawrence was alarmed by the Soviet Union's first nuclear test in August 1949. The proper response, he concluded, was an all-out effort to build a bigger nuclear weapon: the hydrogen bomb.

Lawrence proposed to use accelerators instead of nuclear reactors to produce the neutrons needed to create the tritium the bomb required, as well as plutonium, which was more difficult, as much higher energies would be required.

Lawrence strongly backed Edward Teller's campaign for a second nuclear weapons laboratory, which Lawrence proposed to locate with the MTA Mark I at Livermore, California.

In addition to the Nobel Prize, Lawrence received the Elliott Cresson Medal and the Hughes Medal in 1937, the Comstock Prize in Physics in 1938, the Duddell Medal and Prize in 1940, and many others.

He was made an Officer of the Legion d'Honneur in 1948, and was the first recipient of the Sylvanus Thayer Award by the US Military Academy in 1958.

Despite suffering from a serious flare-up of his chronic ulcerative colitis, Lawrence decided to go, but he became ill while in Geneva, and was rushed back to the hospital at Stanford University.

Surgeons removed much of his large intestine, but found other problems, including severe atherosclerosis in one of his arteries. He died in Palo Alto Hospital on August 27, 1958.