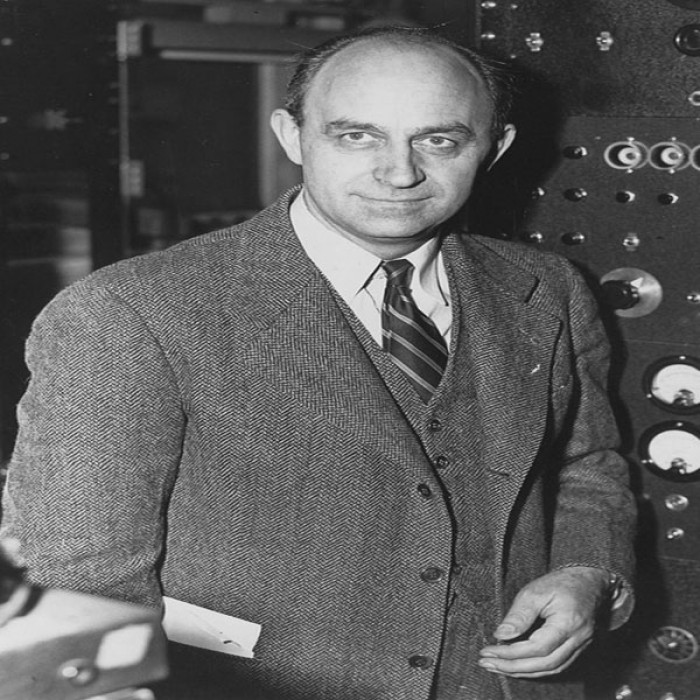 He was one of the few physicists to excel both theoretically and experimentally.

Fermi held several patents related to the use of nuclear power, and was awarded the 1938 Nobel Prize in Physics for his work on induced radioactivity by neutron bombardment and the discovery of transuranic elements.

He made significant contributions to the development of quantum theory, nuclear and particle physics, and statistical mechanics.

After Wolfgang Pauli announced his exclusion principle in 1925, Fermi followed with a paper in which he applied the principle to an ideal gas, employing a statistical formulation now known as Fermi–Dirac statistics. Today, particles that obey the exclusion principle are called "fermions".

Fermi left Italy in 1938 to escape new Italian Racial Laws that affected his Jewish wife Laura Capon. He emigrated to the United States where he worked on the Manhattan Project during World War II.

He was present at the Trinity test on 16 July 1945, where he used his Fermi method to estimate the bomb's yield.

Following the detonation of the first Soviet fission bomb in August 1949, he strongly opposed the development of a hydrogen bomb on both moral and technical grounds.

He was among the scientists who testified on Oppenheimer's behalf at the 1954 hearing that resulted in the denial of the latter's security clearance.

Fermi did important work in particle physics, especially related to pions and muons, and he speculated that cosmic rays arose through material being accelerated by magnetic fields in interstellar space.

The synthetic element fermium, making him one of 16 scientists who have elements named after them.

Although he was baptised a Roman Catholic in accordance with his grandparents' wishes, his family was not particularly religious; Enrico was an agnostic throughout his adult life.

As a young boy he shared the same interests as his brother Giulio, building electric motors and playing with electrical and mechanical toys.

One of Fermi's first sources for his study of physics was a book he found at the local market at Campo de' Fiori in Rome.

Fermi befriended another scientifically inclined student, Enrico Persico, and together the two worked on scientific projects such as building gyroscopes and trying to accurately measure the acceleration of Earth's gravity.

Fermi's interest in physics was further encouraged by his father's colleague Adolfo Amidei, who gave him several books on physics and mathematics, which he read and assimilated quickly.

Fermi graduated from high school in July 1918 and, at Amidei's urging, applied to the Scuola Normale Superiore in Pisa.

The 17-year-old Fermi chose to derive and solve the partial differential equation for a vibrating rod, applying Fourier analysis in the solution.

The examiner, Professor Giuseppe Pittarelli from the Sapienza University of Rome, interviewed Fermi and praised that he would become an outstanding physicist in the future. Fermi achieved first place in the classification of the entrance exam.

Fermi submitted his thesis, "A theorem on probability and some of its applications" (Un teorema di calcolo delle probabilità ed alcune sue applicazioni), to the Scuola Normale Superiore in July 1922, and received his laurea at the unusually young age of 20.

In 1924 Fermi was initiated to the Freemasonry in the Masonic Lodge "Adriano Lemmi" of the Grand Orient of Italy.

Fermi decided to travel abroad, and spent a semester studying under Max Born at the University of Göttingen, where he met Werner Heisenberg and Pascual Jordan.

Fermi then studied in Leiden with Paul Ehrenfest from September to December 1924 on a fellowship from the Rockefeller Foundation obtained through the intercession of the mathematician Vito Volterra.

From January 1925 to late 1926, Fermi taught mathematical physics and theoretical mechanics at the University of Florence, where he teamed up with Rasetti to conduct a series of experiments on the effects of magnetic fields on mercury vapour.

The paper was especially notable for Fermi's statistical formulation, which describes the distribution of particles in systems of many identical particles that obey the exclusion principle.

This was independently developed soon after by the British physicist Paul Dirac, who also showed how it was related to the Bose–Einstein statistics.

Accordingly, it is now known as Fermi–Dirac statistics. Following Dirac, particles that obey the exclusion principle are today called "fermions", while those that do not are called "bosons".

Fermi applied for a chair of mathematical physics at the University of Cagliari on Sardinia, but was narrowly passed over in favour of Giovanni Giorgi.

In 1926, at the age of 24, he applied for a professorship at the Sapienza University of Rome.

During their time in Rome, Fermi and his group made important contributions to many practical and theoretical aspects of physics.

Fermi arrived in New York City on 2 January 1939. He was immediately offered posts at five different universities, and accepted a post at Columbia University, where he had already given summer lectures in 1936.

Fermi was among the first to warn military leaders about the potential impact of nuclear energy, giving a lecture on the subject at the Navy Department on 18 March 1939.

Fermi became the Charles H. Swift Distinguished Professor of Physics at the University of Chicago on 1 July 1945.

He was elected a member of the U.S. National Academy of Sciences in 1945.

Following the detonation of the first Soviet fission bomb in August 1949, Fermi, along with Isidor Rabi, wrote a strongly worded report for the committee, opposing the development of a hydrogen bomb on moral and technical grounds.

Fermi died at age 53 of stomach cancer in his home in Chicago, and was interred at Oak Woods Cemetery.

Fermi received numerous awards in recognition of his achievements, including the Matteucci Medal in 1926, the Nobel Prize for Physics in 1938, the Hughes Medal in 1942, etc.

Since 1956, the United States Atomic Energy Commission has named its highest honour, the Fermi Award, after him.