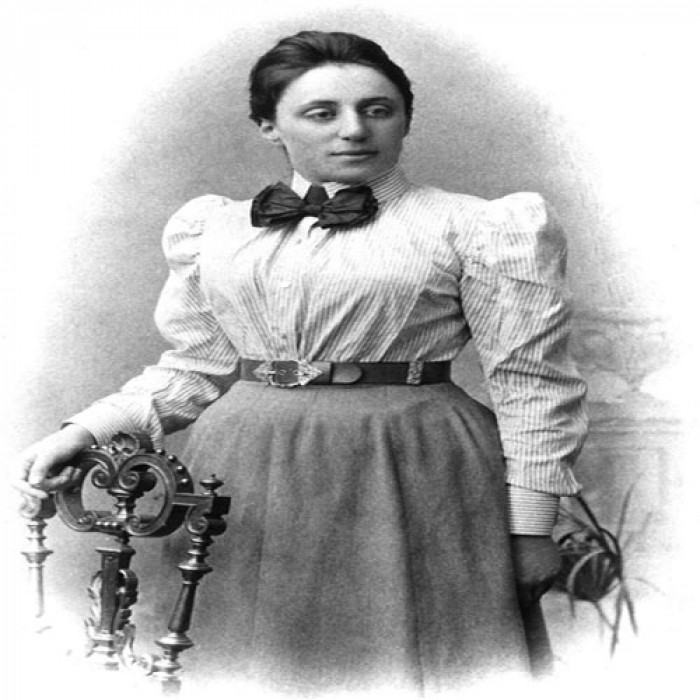 Amalie Emmy Noether (23 March 1882 – 14 April 1935) was a German mathematician known for her landmark contributions to abstract algebra and theoretical physics.

She was described by Pavel Alexandrov, Albert Einstein, Jean Dieudonné, Hermann Weyl, and Norbert Wiener as the most important woman in the history of mathematics.

As one of the leading mathematicians of her time, she developed the theories of rings, fields, and algebras.

In physics, Noether's theorem explains the connection between symmetry and conservation laws.

Noether was born to a Jewish family in the Franconian town of Erlangen; her father was a mathematician, Max Noether.

She originally planned to teach French and English after passing the required examinations, but instead studied mathematics at the University of Erlangen, where her father lectured.

In 1915, she was invited by David Hilbert and Felix Klein to join the mathematics department at the University of Göttingen, a world-renowned center of mathematical research.

Noether's mathematical work has been divided into three "epochs".

In the first (1908–19), she made contributions to the theories of algebraic invariants and number fields.

Her work on differential invariants in the calculus of variations, Noether's theorem, has been called "one of the most important mathematical theorems ever proved in guiding the development of modern physics".

In her classic paper Idealtheorie in Ringbereichen (Theory of Ideals in Ring Domains, 1921) Noether developed the theory of ideals in commutative rings into a tool with wide-ranging applications.

She made elegant use of the ascending chain condition, and objects satisfying it are named Noetherian in her honor.

In the third epoch (1927–35), she published works on noncommutative algebras and hypercomplex numbers and united the representation theory of groups with the theory of modules and ideals.

In addition to her own publications, Noether was generous with her ideas and is credited with several lines of research published by other mathematicians, even in fields far removed from her main work, such as algebraic topology.

Emmy Noether was born on 23 March 1882, the first of four children.

Although Noether's theorem had a profound effect upon physics, among mathematicians she is best remembered for her seminal contributions to abstract algebra.

Noether's groundbreaking work in algebra began in 1920. In collaboration with W. Schmeidler, she then published a paper about the theory of ideals in which they defined left and right ideals in a ring.

Her frugal lifestyle at first was due to being denied pay for her work; however, even after the university began paying her a small salary in 1923, she continued to live a simple and modest life.

She was paid more generously later in her life, but saved half of her salary to bequeath to her nephew, Gottfried E. Noether.

In 1932 Emmy Noether and Emil Artin received the Ackermann–Teubner Memorial Award for their contributions to mathematics.

In April 1935 doctors discovered a tumor in Noether's pelvis. Worried about complications from surgery, they ordered two days of bed rest first.

During the operation they discovered an ovarian cyst "the size of a large cantaloupe". Two smaller tumors in her uterus appeared to be benign and were not removed, to avoid prolonging surgery.

For three days she appeared to convalesce normally, and she recovered quickly from a circulatory collapse on the fourth. On 14 April she fell unconscious, her temperature soared to 109 °F (42.8 °C), and she died.

Noether's work in abstract algebra and topology was influential in mathematics, while in physics, Noether's theorem has far-ranging consequences for theoretical physics and dynamic systems.

In the century from 1832 to Noether's death in 1935, the field of mathematics—specifically algebra—underwent a profound revolution, whose reverberations are still being felt.

In 1923–24, Noether applied her ideal theory to elimination theory—in a formulation that she attributed to her student, Kurt Hentzelt—showing that fundamental theorems about the factorization of polynomials could be carried over directly.

In her 1926 paper, Noether extended Hilbert's theorem to representations of a finite group over any field; the new case that did not follow from Hilbert's work is when the characteristic of the field divides the order of the group.

Noether's contributions to topology illustrate her generosity with ideas and how her insights could transform entire fields of mathematics.

Noether is credited with fundamental ideas that led to the development of algebraic topology from the earlier combinatorial topology, specifically, the idea of homology groups.

Noether also was responsible for a number of other advances in the field of algebra. With Emil Artin, Richard Brauer, and Helmut Hasse, she founded the theory of central simple algebras.

Noether's work continues to be relevant for the development of theoretical physics and mathematics and she is consistently ranked as one of the greatest mathematicians of the twentieth century.

At an exhibition at the 1964 World's Fair devoted to Modern Mathematicians, Noether was the only woman represented among the notable mathematicians of the modern world.