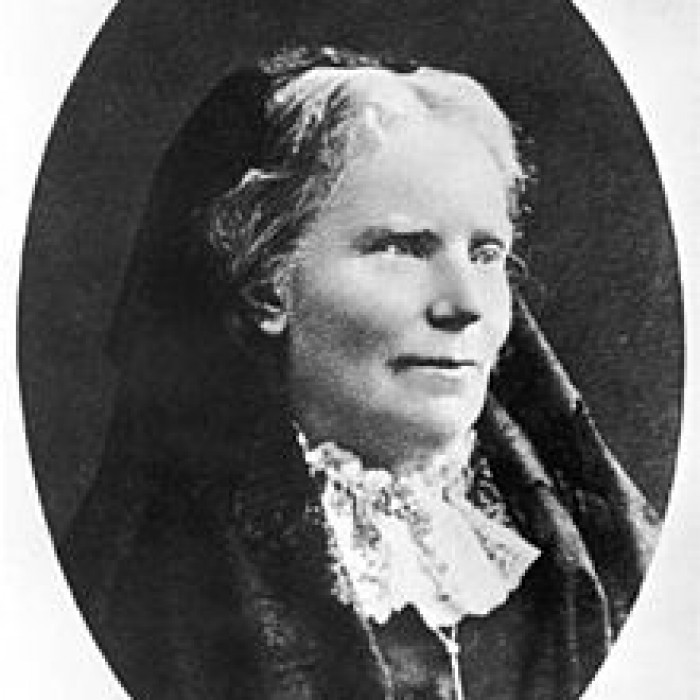 Elizabeth was born in a house on Dicksons Street in Bristol, Gloucestershire, England, to Samuel Blackwell, a sugar refiner, and his wife Hannah (Lane) Blackwell.

Blackwell's earliest memories were of her time living at a house on 1 Wilson Street, off Portland Square, Bristol. Her childhood at Wilson Street was a happy one.

Blackwell especially remembered the positive and loving influence of her father. Samuel Blackwell was somewhat liberal in his attitudes towards, not only child rearing, but also religion and social ideologies.

He believed that each child, including his girls, should be given the opportunity for unlimited development of their talents and gifts. Blackwell had not only a governess, but also private tutors to supplement her intellectual development.

Blackwell converted to Episcopalianism, probably due to her sister Anna's influence, in December 1838, becoming an active member of St. Paul's Episcopal Church.

In the early 1840s, she began to articulate thoughts about women's rights in her diaries and letters, and participated in the Harrison political campaign of 1840.

In 1844, with the help of her sister Anna, Blackwell procured a teaching job that paid $400 per year in Henderson, Kentucky. Although she was pleased with her class, she found the accommodations and schoolhouse lacking.

She returned to Cincinnati only half a year later, resolved to find a more stimulating means of spending her life.

In Asheville, Blackwell lodged with the respected Reverend John Dickson, who happened to have been a physician before he became a clergyman. Dickson approved of Blackwell's career aspirations, and allowed her to use the medical books in his library to study.

Dickson's school closed down soon after, and Blackwell moved to the residence of Reverend Dickson's brother, Samuel Henry Dickson, a prominent Charleston physician.

She started teaching in 1846 at a boarding school in Charleston run by a Mrs. Du Pre. With the help of Reverend Dickson's brother, Blackwell inquired into the possibility of medical study via letters, with no favorable responses.

In 1847, Blackwell left Charleston for Philadelphia and New York, with the aim of personally investigating the opportunities for medical study. Blackwell's greatest wish was to be accepted into one of the Philadelphia medical schools.

In October, 1847, Blackwell was accepted as a medical student by Hobart College, then called Geneva Medical College, located in upstate New York.

On January 23, 1849, Elizabeth Blackwell became the first woman to achieve a medical degree in the United States. The local press reported her graduation favourably, and when the dean, Dr. Charles Lee, conferred her degree, he stood up and bowed to her.

In April, 1849, Blackwell made the decision to continue her studies in Europe. She visited a few hospitals in Britain and then headed to Paris.

In June, Blackwell enrolled at La Maternité; a "lying-in" hospital, under the condition that she would be treated as a student midwife, not a physician.

On 4 November 1849, when Blackwell was treating an infant with ophthalmia neonatorum, she spurted some contaminated solution into her own eye accidentally, and contracted the infection.

She lost sight in her left eye, causing her to have her eye surgically extracted and thus lost all hope of becoming a surgeon. After a period of recovery, she enrolled at St Bartholomew's Hospital in London in 1850.

Feeling that the prejudice against women in medicine was not as strong there, Blackwell returned to New York City in 1851 with the hope of establishing her own practice.

In 1853, Blackwell established a small dispensary near Tompkins Square. She also took Marie Zakrzewska, a Polish woman pursuing a medical education, under her wing, serving as her preceptor in her pre-medical studies.

In 1857, Dr. Marie Zakrzewska, along with Blackwell and her sister Emily, who had also obtained a medical degree, expanded Blackwell's original dispensary into the New York Infirmary for Indigent Women and Children.

In 1858, under a clause in the Medical Act 1858 that recognised doctors with foreign degrees practicing in Britain before 1858, she was able to become the first woman to have her name entered on the General Medical Council's medical register.

In 1874, Blackwell established a women's medical school in London with Sophia Jex-Blake, who had been a student at the New York Infirmary years earlier. Blackwell had doubts about Jex-Blake, and thought that she was dangerous, belligerent and tactless.

After the establishment of the school, Blackwell lost much of her authority to Jex-Blake, and was elected as a lecturer in midwifery. She resigned this position in 1877, officially retiring from her medical career.

After leaving for Britain in 1869, Blackwell diversified her interests, and was active both in social reform and authorship. She co-founded the National Health Society in 1871.

In 1907, while holidaying in Kilmun, Scotland, Blackwell fell down a flight of stairs, and was left almost completely mentally and physically disabled.

On 31 May 1910, she died at her home in Hastings, Sussex, after suffering a stroke that paralyzed half her body.

The British artist Edith Holden, whose Unitarian family were Blackwell's relatives, was given the middle name "Blackwell" in her honor.

In 2013 the University of Bristol launched the Elizabeth Blackwell Institute for Health Research.