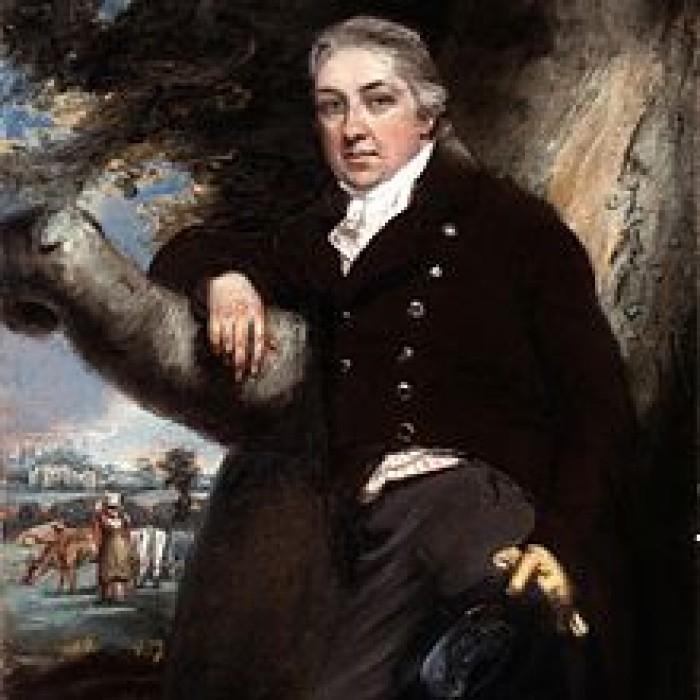 Edward Jenner (17 May 1749 – 26 January 1823) was an English physician and scientist who was the pioneer of smallpox vaccine, the world's first vaccine.

The terms "vaccine" and "vaccination" are derived from Variolae vaccinae (smallpox of the cow), the term devised by Jenner to denote cowpox.

He used it in 1798 in the long title of his Inquiry into the...Variolae vaccinae...known...[as]...the Cow Pox, in which he described the protective effect of cowpox against smallpox.

A member of the Royal Society, in the field of zoology he was the first person to describe the brood parasitism of the cuckoo.

Jenner is often called "the father of immunology", and his work is said to have "saved more lives than the work of any other human".

Edward Anthony Jenner was born on 17 May 1749 (6 May Old Style) in Berkeley, Gloucestershire, as the eighth of nine children.

He went to school in Wotton-under-Edge and Cirencester. During this time, he was inoculated for smallpox, which had a lifelong effect upon his general health.

At the age of 14, he was apprenticed for seven years to Daniel Ludlow, a surgeon of Chipping Sodbury, South Gloucestershire, where he gained most of the experience needed to become a surgeon himself.

In 1770, Jenner became apprenticed in surgery and anatomy under surgeon John Hunter and others at St George's Hospital.

Returning to his native countryside by 1773, Jenner became a successful family doctor and surgeon, practising on dedicated premises at Berkeley.

Jenner was elected fellow of the Royal Society in 1788, following his publication of a careful study of the previously misunderstood life of the nested cuckoo, a study that combined observation, experiment, and dissection.

Jenner's understanding of the cuckoo's behaviour was not entirely believed, until the artist Jemima Blackburn, a keen observer of bird life, saw a blind nestling pushing out a host's egg.

Jenner married Catherine Kingscote (died 1815 from tuberculosis) in March 1788. He might have met her while he and other fellows were experimenting with balloons.

He earned his MD from the University of St Andrews in 1792. He is credited with advancing the understanding of angina pectoris.

On 14 May 1796, Jenner tested his hypothesis by inoculating James Phipps, an eight-year-old boy who was the son of Jenner's gardener.

Jenner's continuing work on vaccination prevented him from continuing his ordinary medical practice.

Jenner continued his research and reported it to the Royal Society, which did not publish the initial paper.

Eventually, vaccination was accepted, and in 1840, the British government banned variolation – the use of smallpox to induce immunity – and provided vaccination using cowpox free of charge.

In 1803 in London, he became president of the Jennerian Society, concerned with promoting vaccination to eradicate smallpox.

Jenner was found in a state of apoplexy on 25 January 1823, with his right side paralysed.

He never fully recovered and eventually died of an apparent stroke, his second, on 26 January 1823, aged 73.

Neither fanatic nor lax, Jenner was a Christian who in his personal correspondence showed himself quite spiritual; he treasured the Bible.

In 1979, the World Health Organization declared smallpox an eradicated disease. This was the result of coordinated public health efforts, but vaccination was an essential component.

Jenner's vaccine laid the foundation for contemporary discoveries in immunology. In 2002, Jenner was named in the BBC's list of the 100 Greatest Britons following a UK-wide vote.

The lunar crater Jenner is named in his honour. Jenner was recognized in the TV show The Walking Dead. In "TS-19", a CDC scientist is named Edwin Jenner.