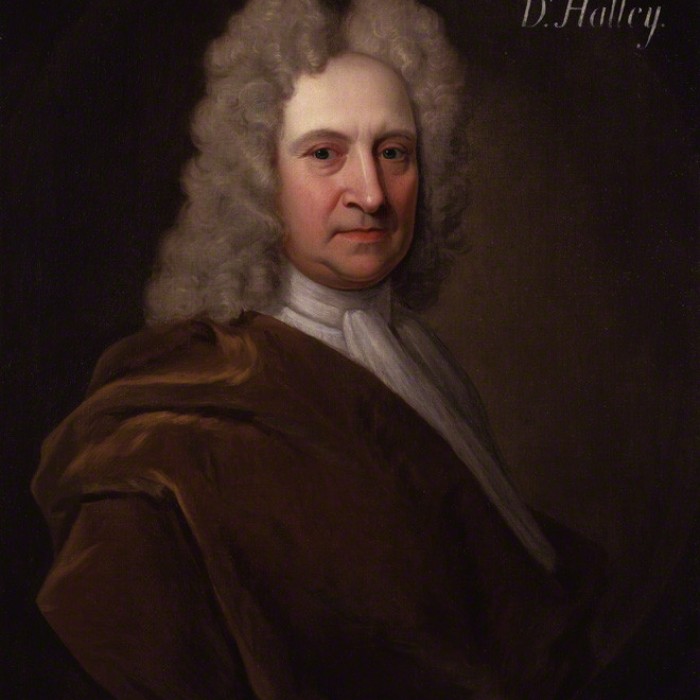 He is best known for computing the orbit of Halley's Comet.

He was the second Astronomer Royal in Britain, succeeding John Flamsteed.

Halley was born in Haggerston, in east London. His father, Edmond Halley Sr., came from a Derbyshire family and was a wealthy soap-maker in London.

As a child, Halley was very interested in mathematics. He studied at St Paul's School, and from 1673 at The Queen's College, Oxford.

While still an undergraduate, Halley published papers on the Solar System and sunspots.

Halley became an assistant to John Flamsteed, the Astronomer Royal at the Greenwich Observatory, in 1675.

In 1676, Halley visited the south Atlantic island of Saint Helena and set up an observatory with a large sextant with telescopic sights to catalogue the stars of the southern hemisphere.

In 1686, Halley published the second part of the results from his Helenian expedition, being a paper and chart on trade winds and monsoons.

Halley spent most of his time on lunar observations, but was also interested in the problems of gravity.

In 1691, Halley built a diving bell, a device in which the atmosphere was replenished by way of weighted barrels of air sent down from the surface.

In 1691 Halley sought the post of Savilian Professor of Astronomy at Oxford, but, due to being accused of atheism, was opposed by the Archbishop of Canterbury, John Tillotson, and Bishop Stillingfleet.

In 1692, Halley put forth the idea of a hollow Earth consisting of a shell about 500 miles (800 km) thick, two inner concentric shells and an innermost core.

In 1693 Halley published an article on life annuities, which featured an analysis of age-at-death on the basis of the Breslau statistics Caspar Neumann had been able to provide.

The Royal Society censured Halley for suggesting in 1694 that the story of Noah's flood might be an account of a cometary impact.

In 1698, Halley was given command of the Paramour, a 52 feet (16 m) pink, so that he could carry out investigations in the South Atlantic into the laws governing the variation of the compass.

On 19 August 1698, he took command of the ship and, in November 1698, sailed on what was the first purely scientific voyage by an English naval vessel.

In November 1703, Halley was appointed Savilian Professor of Geometry at the University of Oxford.

In 1716, Halley suggested a high-precision measurement of the distance between the Earth and the Sun by timing the transit of Venus.

Halley succeeded John Flamsteed in 1720 as Astronomer Royal, a position Halley held until his death.

Halley died in 1742 at the age of 85. He was buried in the graveyard of the old church of St Margaret's, Lee (since rebuilt), at Lee Terrace, Blackheath.

Halley married Mary Tooke in 1682 and settled in Islington. The couple had three children.