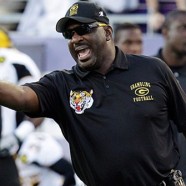 Douglas Lee "Doug" Williams (born August 9, 1955) is a former American football quarterback and former head coach of the Grambling State Tigers football team. Williams is best known for his remarkable performance in Super Bowl XXII. Williams, who was named the Super Bowl MVP, passed for a Super Bowl record 340 yards and four touchdowns, with one interception. He also became the first player in Super Bowl history to pass for four touchdowns in a single quarter, and four in a half. Williams was the first black quarterback to start in an NFL league championship game and the first to win a Super Bowl, in 1988 (Russell Wilson became the second to win in 2014 with Super Bowl XLVIII)