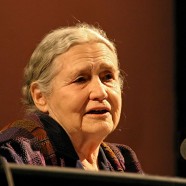 Lessing was awarded the 2007 Nobel Prize in Literature. In awarding the prize, the Swedish Academy described her as "that epicist of the female experience, who with scepticism, fire and visionary power has subjected a divided civilisation to scrutiny". Lessing was the eleventh woman and the oldest person ever to receive the Nobel Prize in Literature.

In 2001, Lessing was awarded the David Cohen Prize for a lifetime's achievement in British literature. In 2008, The Times ranked her fifth on a list of "The 50 greatest British writers since 1945".