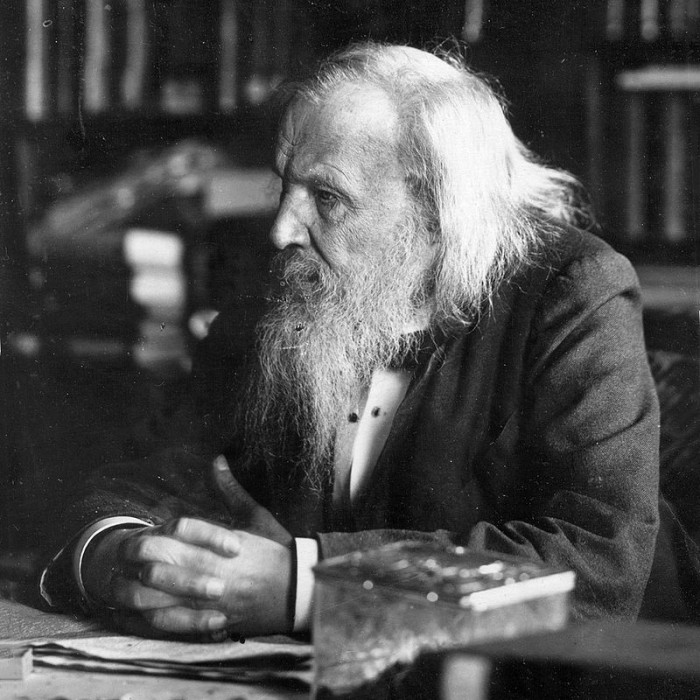 Mendeleev was born in the village of Verkhnie Aremzyani, near Tobolsk in Siberia, to Ivan Pavlovich Mendeleev and Maria Dmitrievna Mendeleeva (née Kornilieva).

Mendeleev was raised as an Orthodox Christian, his mother encouraging him to "patiently search divine and scientific truth."

His father was a teacher of fine arts, politics and philosophy. Unfortunately for the family's financial well being, his father became blind and lost his teaching position.

At the age of 13, after the passing of his father and the destruction of his mother's factory by fire, Mendeleev attended the Gymnasium in Tobolsk.

In 1849, his mother took Mendeleev across the entire state of Russia from Siberia to Moscow with the aim of getting Mendeleev a higher education.

The now poor Mendeleev family relocated to Saint Petersburg, where he entered the Main Pedagogical Institute in 1850.

After graduation, he contracted tuberculosis, causing him to move to the Crimean Peninsula on the northern coast of the Black Sea in 1855.

While there he became a science master of the Simferopol gymnasium №1. In 1857, he returned to Saint Petersburg with fully restored health.

Between 1859 and 1861, he worked on the capillarity of liquids and the workings of the spectroscope in Heidelberg.

Later in 1861 , he published a textbook named Organic Chemistry. This won him the Demidov Prize of the Petersburg Academy of Sciences.

On 4 April 1862 he became engaged to Feozva Nikitichna Leshcheva, and they married on 27 April 1862 at Nikolaev Engineering Institute's church in Saint Petersburg.

In 1865 he became Doctor of Science for his dissertation "On the Combinations of Water with Alcohol".

He achieved tenure in 1867 at St. Petersburg University and started to teach inorganic chemistry, while succeeding Voskresenskii to this post.

In 1876, he became obsessed with Anna Ivanova Popova and began courting her; in 1881 he proposed to her and threatened suicide if she refused.

His divorce from Leshcheva was finalized one month after he had married Popova (on 2 April) in early 1882.

Even after the divorce, Mendeleev was technically a bigamist; the Russian Orthodox Church required at least seven years before lawful remarriage.

Though Mendeleev was widely honored by scientific organizations all over Europe, including (in 1882) the Davy Medal from the Royal Society of London.

He was elected a Foreign Member of the Royal Society (ForMemRS) in 1892, and in 1893 he was appointed director of the Bureau of Weights and Measures, a post which he occupied till his death.

Mendeleev also investigated the composition of petroleum, and helped to found the first oil refinery in Russia.

He recognized the importance of petroleum as a feedstock for petrochemicals.

He is credited with a remark that burning petroleum as a fuel "would be akin to firing up a kitchen stove with bank notes."

In 1905, Mendeleev was elected a member of the Royal Swedish Academy of Sciences.

The following year the Nobel Committee for Chemistry recommended to the Swedish Academy to award the Nobel Prize in Chemistry for 1906 to Mendeleev for his discovery of the periodic system.

In 1907, Mendeleev died at the age of 72 in Saint Petersburg from influenza.

The crater Mendeleev on the Moon, as well as element number 101, the radioactive mendelevium, are named after him.

Mendeleev published his periodic table of all known elements and predicted several new elements to complete the table in a Russian-language journal.

Dmitri Mendeleev is often referred to as the Father of the Periodic Table. He called his table or matrix, "the Periodic System".

A number of places and objects are associated with the name and achievements of the scientist.

In Moscow, there is the D. Mendeleyev University of Chemical Technology of Russia.

A large lunar impact crater Mendeleev that is located on the far side of the Moon, as seen from the Earth, also bears the name of the scientist.