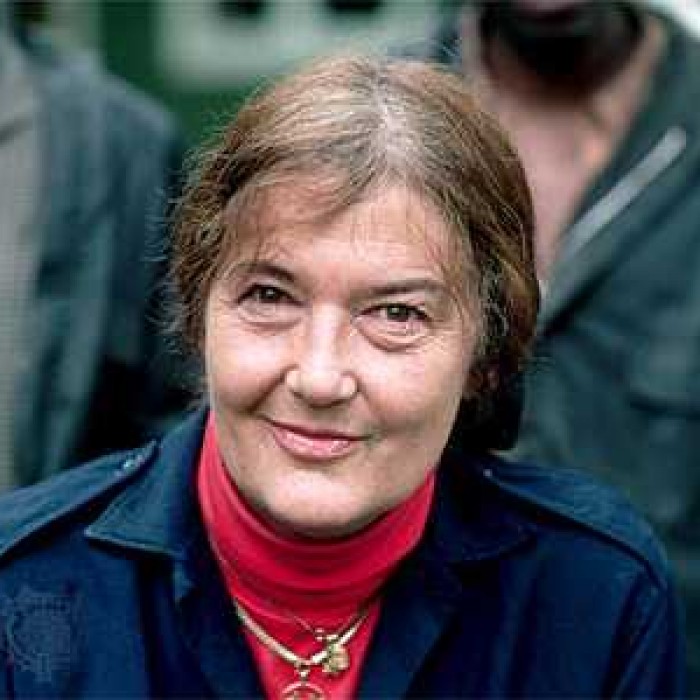 She undertook an extensive study of mountain gorilla groups over a period of 18 years.

She studied them daily in the mountain forests of Rwanda, initially encouraged to work there by anthropologist Louis Leakey.

Her 1983 book, Gorillas in the Mist, combines her scientific study of the gorillas at Karisoke Research Center with her own personal story.

It was adapted into a 1988 film of the same name. Fossey was murdered in 1985; the case remains open.

Called one of the foremost primatologists in the world, Fossey, along with Jane Goodall and Birutė Galdikas, were the so-called Trimates.

Her parents divorced when she was six. Her mother remarried the following year, to businessman Richard Price.

Her father tried to keep in full contact, but her mother discouraged it, and all contact was subsequently lost.

Dian's stepfather, Richard Price, never treated Dian as his own child. He would not allow Dian to sit at the dining room table with him or Dian's mother during dinner meals.

Struggling with personal insecurity, Dian turned to animals as a way to gain acceptance. Her love for animals began with her first pet goldfish and continued throughout her entire life.

At age six, she began horse riding, earning a letter from her school; by her graduation in 1954, Fossey had established herself as an equestrienne.

Educated at Lowell High School, following the guidance of her stepfather she enrolled in a business course at the College of Marin.

However, spending her summer on a ranch in Montana at age 19 rekindled her love of animals, and she enrolled in a pre-veterinary course in biology at the University of California, Davis.

In defiance to her stepfather's wishes that she attend a business school, Dian wanted to spend her professional life working with animals.

Although Fossey had always been an exemplary student, she had difficulties with basic sciences including chemistry and physics, and failed her second year of the program.

She transferred to San Jose State College where she was a member of Kappa Alpha Theta sorority to study occupational therapy, receiving her bachelor's degree in 1954.

Fossey became close with her coworker Mary White "Gaynee" Henry, secretary to the hospital's chief administrator and the wife of one of the doctors, Michael J. Henry.

The Henrys invited Fossey to join them on their family farm, where she worked with livestock on a daily basis and also experienced an inclusive family atmosphere that had been missing for most of her life.

Fossey turned down an offer to join the Henrys on an African tour due to lack of finances, but in 1963 she borrowed $8,000 (one year's salary), took out her life savings and went on a seven-week visit to Africa.

After studying Swahili and auditing a class on primatology (the scientific study of primates) during the eight months it took to get her visa and funding, Fossey arrived in Nairobi in December 1966.

Fossey identified three distinct groups in her study area, but could not get close to them.

She eventually found that mimicking their actions and making grunting sounds assured them, together with submissive behavior and eating of the local celery plant.

During the political upheaval, a rebellion and battles took place in the Kivu Province. On July 9, 1967, soldiers arrived at the camp to escort Fossey and her research workers down, and she was interned at Rumangabo for two weeks.

Fossey eventually escaped through bribery to Walter Baumgärtel's Travellers Rest Hotel in Kisoro, where her escort was arrested by the Ugandan military.

Advised by the Ugandan authorities not to return to Congo, after meeting Leakey in Nairobi, Fossey agreed with him against US Embassy advice to restart her study on the Rwandan side of the Virungas.

On September 24, 1967, Fossey founded the Karisoke Research Center, a remote rainforest camp nestled in Ruhengeri province in the saddle of two volcanoes.

In 1978, Fossey attempted to prevent the export of two young gorillas, Coco and Pucker, from Rwanda to the zoo in Cologne, Germany.

Fossey strongly opposed wildlife tourism, as gorillas are very susceptible to human anthroponotic diseases like influenza for which they have no immunity.

Fossey is responsible for the revision of a European Community project that converted parkland into pyrethrum farms.

Sometime during the day on New Year's Eve 1977, Fossey's favorite gorilla, Digit, was killed by poachers.

During her African safari, Fossey met Alexie Forrester, the brother of an African she had been dating in Louisville; Fossey and Forrester later became engaged.

In her later years, Fossey became involved with National Geographic photographer Bob Campbell after a year of working together at Karisoke, with Campbell promising to leave his wife.

Eventually the pair grew apart through her dedication to the gorillas and Karisoke, along with his need to work further afield and his marriage.

In 1970, during her time in Cambridge to get her Ph.D., she discovered she was pregnant and had an abortion, later commenting that "you can't be a cover girl for National Geographic magazine and be pregnant."

Fossey had been plagued by lung problems from an early age, and later in her life, she suffered from advanced emphysema brought on by years of heavy cigarette smoking.

In the early morning of December 27, 1985, Fossey was discovered murdered in the bedroom of her cabin located at the far edge of the camp in the Virunga Mountains, Rwanda.

After Fossey's death, her entire staff, including Rwelekana, a tracker she had fired months before, were arrested. All were later released except Rwelekana, who was later found dead in prison, supposedly having hanged himself.

Fossey was reported to have captured and held Rwandans whom she suspected of poaching, stripped and then beaten them with stinging nettles.

Fossey made discoveries about gorillas including how females transfer from group to group over the decades, gorilla vocalization, hierarchies and social relationships among groups, rare infanticide, gorilla diet, and how gorillas recycle nutrients.

By 1980, Fossey, who had obtained her PhD at Cambridge University in the UK, was recognized as the world's leading authority on the physiology and behavior of mountain gorillas, defining gorillas as being.

Fossey lectured as professor at Cornell University in 1981–83. Her bestselling book Gorillas in the Mist was praised by Nikolaas Tinbergen, the Dutch ethologist and ornithologist who won the 1973 Nobel Prize in Physiology or Medicine.

After her death, Fossey's Digit Fund in the U.S. was renamed the Dian Fossey Gorilla Fund International.

The Rwandan people adapted the traditional household baby naming ceremony Kwita Izina to use with the gorillas.

Her 82nd birthday in 2014 was marked by a Google Doodle appearing on its search homepage worldwide.

In the 2011 BBC documentary All Watched Over by Machines of Loving Grace, Adam Curtis uses Fossey as a symbol of the ideology of ecology, a balance of nature and western post-colonial political exploits in Africa.