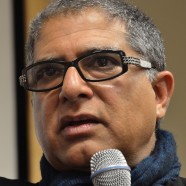 Deepak Chopra ( born October 22, 1947) is an Indian American author, public speaker, alternative medicine advocate, and a prominent figure in the New Age movement. Through his books and videos, he has become one of the best-known and wealthiest figures in alternative medicine.

Chopra studied medicine in India before emigrating to the United States in 1970 where he completed residencies in internal medicine and endocrinology. A licensed physician, in 1980 he became chief of staff at the New England Memorial Hospital (NEMH). He met Maharishi Mahesh Yogi in 1985 and became involved with the Transcendental Meditation movement (TM). He resigned his position at NEMH shortly after to establish the Maharishi Ayurveda Health Center.[8] Chopra gained a following in 1993 after his interview on the The Oprah Winfrey Show regarding his books.[9] He then left the TM movement to become the executive director of Sharp HealthCare's Center for Mind-Body Medicine and in 1996 he co-founded the Chopra Center for Wellbeing.

Chopra says, in combining principles from Ayurveda (Hindu traditional medicine) and mainstream medicine, his approach to health incorporates ideas about the mind-body relationship, a belief in teleology in nature and a belief in the primacy of consciousness over matter, and that "consciousness creates reality". He claims that his practices can extend the human lifespan and treat chronic disease.