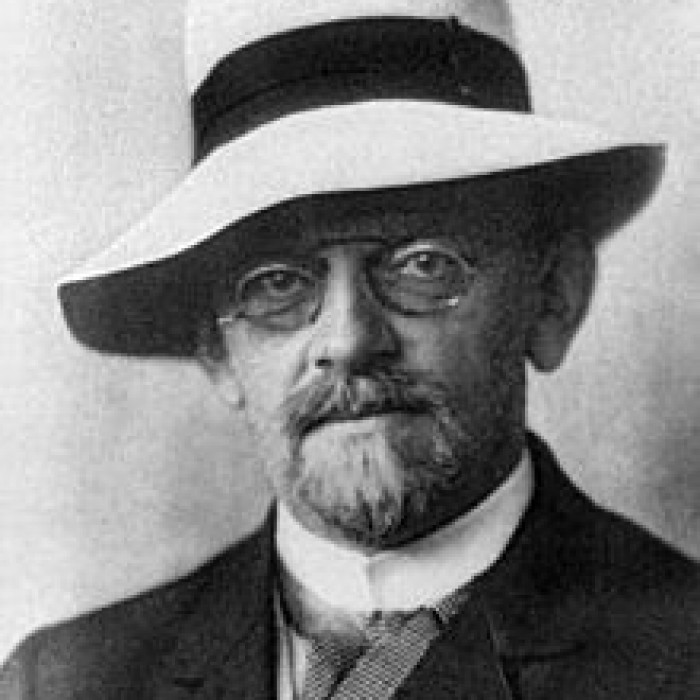 He is recognized as one of the most influential and universal mathematicians of the 19th and early 20th centuries.

Hilbert discovered and developed a broad range of fundamental ideas in many areas, including invariant theory and the axiomatization of geometry.

He also formulated the theory of Hilbert spaces, one of the foundations of functional analysis.

A famous example of his leadership in mathematics is his 1900 presentation of a collection of problems that set the course for much of the mathematical research of the 20th century.

Hilbert is known as one of the founders of proof theory and mathematical logic, as well as for being among the first to distinguish between mathematics and metamathematics.

Hilbert, the first of two children of Otto and Maria Therese (Erdtmann) Hilbert, was born in the Province of Prussia, Kingdom of Prussia.

In late 1872, Hilbert entered the Friedrichskolleg Gymnasium; but, after an unhappy period, he transferred to (late 1879) and graduated from (early 1880) the more science-oriented Wilhelm Gymnasium.

Upon graduation, in autumn 1880, Hilbert enrolled at the University of Königsberg, the "Albertina".

An intense and fruitful scientific exchange among the three began, and Minkowski and Hilbert especially would exercise a reciprocal influence over each other at various times in their scientific careers.

Hilbert obtained his doctorate in 1885, with a dissertation, written under Ferdinand von Lindemann.

Hilbert remained at the University of Konigsberg as a Privatdozent (senior lecturer) from 1886 to 1895.

In 1895, as a result of intervention on his behalf by Felix Klein, he obtained the position of Professor of Mathematics at the University of Gottingen.

Hilbert lived to see the Nazis purge many of the prominent faculty members at University of Göttingen in 1933.

About a year later, Hilbert attended a banquet and was seated next to the new Minister of Education, Bernhard Rust.

By the time Hilbert died in 1943, the Nazis had nearly completely restaffed the university, as many of the former faculty had either been Jewish or married to Jews.

In 1892, Hilbert married Kathe Jerosch (1864–1945), "the daughter of a Königsberg merchant, an outspoken young lady with an independence of mind that matched his own".

Hilbert considered the mathematician Hermann Minkowski to be his "best and truest friend".

Hilbert's first work on invariant functions led him to the demonstration in 1888 of his famous finiteness theorem.

Hilbert put forth a most influential list of 23 unsolved problems at the International Congress of Mathematicians in Paris in 1900.

Around 1909, Hilbert dedicated himself to the study of differential and integral equations; his work had direct consequences for important parts of modern functional analysis.

He also resolved a significant number-theory problem formulated by Waring in 1770.  He made a series of conjectures on class field theory.

His collected works (Gesammelte Abhandlungen) have been published several times.

Hilbert did not work in the central areas of analytic number theory, but his name has become known for the Hilbert–Pólya conjecture, for reasons that are anecdotal.