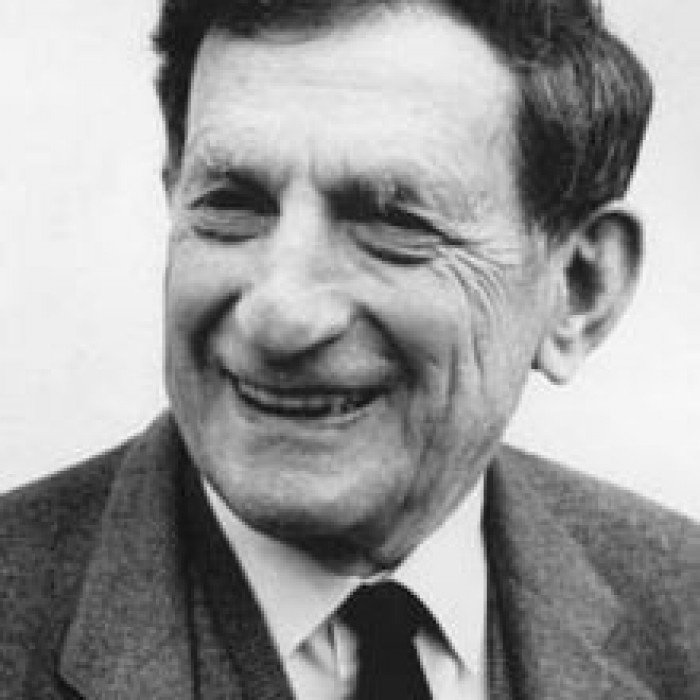 David Joseph Bohm (December 20, 1917 – October 27, 1992) was an American scientist who has been described as one of the most significant theoretical physicists of the 20th century.

He contributed unorthodox ideas to quantum theory, neuropsychology and the philosophy of mind.

Bohm advanced the view that quantum physics meant that the old Cartesian model of reality – that there are two kinds of substance, the mental and the physical, that somehow interact – was too limited.

He also believed that the brain, at the cellular level, works according to the mathematics of some quantum effects, and postulated that thought is distributed and non-localised just as quantum entities are.

Bohm warned of the dangers of rampant reason and technology, advocating instead the need for genuine supportive dialogue, which he claimed could broaden and unify conflicting and troublesome divisions in the social world.

Due to his youthful Communist affiliations, Bohm was the subject of a federal government investigation in 1949, prompting him to leave the United States.

He pursued his scientific career in several countries, becoming first a Brazilian and then a British citizen.

Bohm's main concern was with understanding the nature of reality in general and of consciousness in particular as a coherent whole, which according to Bohm is never static or complete but rather an unfolding process.

He was raised mainly by his father, a furniture-store owner and assistant of the local rabbi. Despite being raised in a Jewish family, he became an agnostic in his teenage years.

He then transferred to the theoretical physics group directed by Robert Oppenheimer at the University of California, Berkeley, where he obtained his doctorate.

During World War II, the Manhattan Project mobilized much of Berkeley's physics research in the effort to produce the first atomic bomb. Though Oppenheimer had asked Bohm to work with him at Los Alamos, the project's director, General Leslie Groves.

Bohm remained in Berkeley, teaching physics, until he completed his Ph.D. in 1943 by an unusual circumstance.

After the war, Bohm became an assistant professor at Princeton University, where he worked closely with Albert Einstein.

In 1950 Bohm was arrested for refusing to answer HUAC's questions. He was acquitted in May 1951, but Princeton had already suspended him.

Bohm then left for Brazil to assume a professorship of physics at the University of São Paulo at Jayme Tiomno's invitation, and on Einstein's and Oppenheimer's recommendation.

During his early period, Bohm made a number of significant contributions to physics, particularly quantum mechanics and relativity theory.

After Bohm's arrival in Brazil on October 10, 1951, the US Consul in São Paulo confiscated his passport, informing him he could retrieve it only to return to his country.

In 1955 Bohm relocated to Israel, where he spent two years working at the Technion at Haifa. There he met Sarah ("Saral") Woolfson, whom he married in 1956.

In 1957 Bohm and his student Yakir Aharonov published a new version of the Einstein–Podolsky–Rosen (EPR) paradox, reformulating the original argument in terms of spin.

In 1959 Bohm and Aharonov discovered the Aharonov–Bohm effect, showing how a magnetic field could affect a region of space in which the field had been shielded, although its vector potential did not vanish there.

In 1961 Bohm was made Professor of Theoretical Physics at the University of London's Birkbeck College, becoming emeritus in 1987. His collected papers are stored there.

In collaboration with Stanford neuroscientist Karl Pribram, Bohm was involved in the early development of the holonomic model of the functioning of the brain

In a 1990 article, "A new theory of the relationship of mind and matter", he resumed his view that there is a close link to mental processes.

In his book On Creativity, quoting the work of Alfred Korzybski, Bohm expressed the view that "metaphysics is an expression of a world view" and is "thus to be regarded as an art form, resembling poetry in some ways and mathematics in others, rather than as an attempt to say something true about reality as a whole."

In his book Science, Order and Creativity, Bohm referred to the views of various biologists on the evolution of the species, including Rupert Sheldrake.

Bohm continued his work in quantum physics past his retirement in 1987. He was elected Fellow of the Royal Society in 1990.

His final work, the posthumously published The Undivided Universe: An Ontological Interpretation of Quantum Theory (1993), resulted from a decades-long collaboration with Basil Hiley.