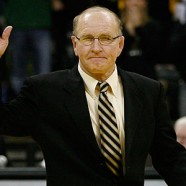 Danny Mack "Dan" Gable (born October 25, 1948) is a retired American Olympic wrestler and head coach. He is best known for his tenure as head coach at the University of Iowa where he won 15 NCAA team titles between 1976 and 1997. He is also famous for having only lost one match in his entire Iowa State University collegiate career – his last – and winning a gold medal at the 1972 Olympic Games in Munich, Germany, while not giving up a single point.