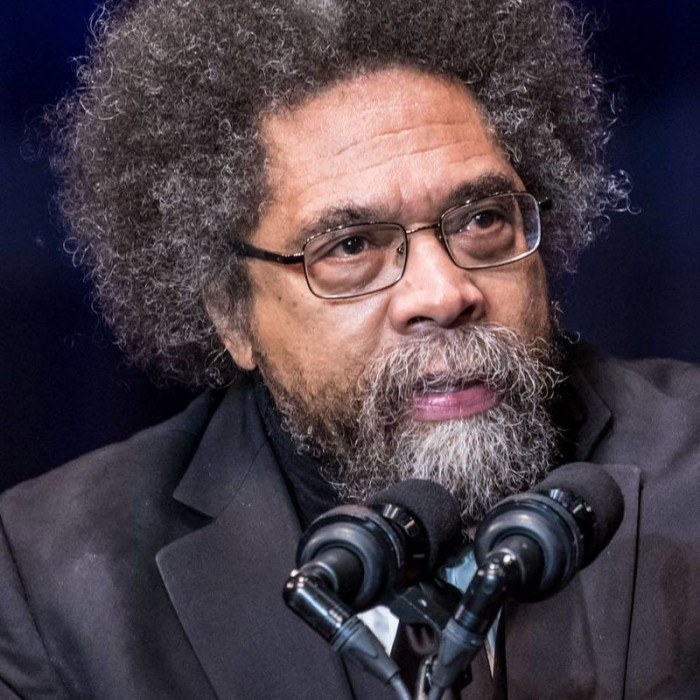 Cornel Ronald West (born June 2, 1953) is an American philosopher, political activist, social critic, author, public intellectual, and prominent member of the Democratic Socialists of America. West is an outspoken voice in American leftist politics, and as such has been critical of many center-left figures, including President Barack Obama and former Secretary of State and 2016 Democratic Presidential nominee Hillary Clinton.

He has held professorships at Harvard University, Princeton University, Yale University, Union Theological Seminary, and the University of Paris during his career. He is also a frequent commentator on politics and social issues in many media outlets.

From 2010 through 2013, West co-hosted a radio program with Tavis Smiley, called Smiley and West. He has also been featured in several documentaries, and made appearances in Hollywood films such as The Matrix Reloaded and The Matrix Revolutions, providing commentary for both films.

West has also made several spoken word and hip hop albums, and due to his work, has been named MTV's Artist of the Week. He has also been portrayed on Saturday Night Live by Kenan Thompson.

The son of a Baptist minister, West's work focuses on the role of race, gender, and class in American society and the means by which people act and react to their "radical conditionedness." Self-styling himself as a radical democrat socialist, West draws intellectual contributions from multiple traditions, including Christianity, the black church, Marxism, neopragmatism, and transcendentalism. Among his most influential books are Race Matters (1994) and Democracy Matters (2004).

In his late-20s, he returned to Harvard as a W. E. B. Du Bois Fellow before becoming an Assistant Professor at Union Theological Seminary in the City of New York. In 1984, he went to Yale Divinity School in what eventually became a joint appointment in American Studies. While at Yale, he participated in campus protests for a clerical labor union and divestment from apartheid South Africa.

One of the protests resulted in his being arrested and jailed. As punishment, the University administration canceled his leave for the spring term in 1987, leading him to commute from Yale in New Haven, Connecticut, where he was teaching two classes, across the Atlantic Ocean to the University of Paris.