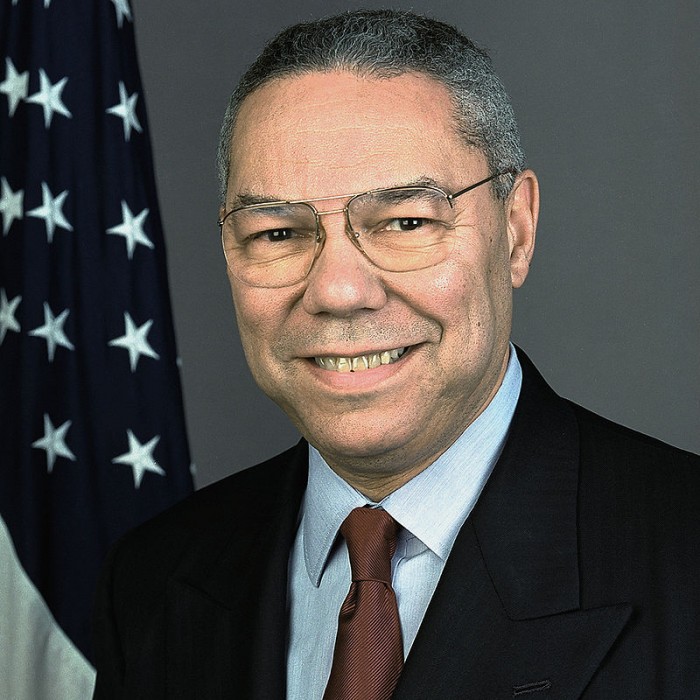 Colin Luther Powell (born April 5, 1937) is an American statesman and a retired four-star general in the United States Army. Powell was born in Harlem as the son of Jamaican immigrants. During his military career, Powell also served as National Security Advisor (1987–1989), as Commander of the U.S. Army Forces Command (1989) and as Chairman of the Joint Chiefs of Staff (1989–1993), holding the latter position during the Persian Gulf War.

Powell was born in New York City and was raised in the South Bronx. His parents, Luther and Maud Powell, immigrated to the United States from Jamaica. Powell was educated in the New York City public schools, graduating from the City College of New York (CCNY), where he earned a bachelor's degree in geology.

He also participated in ROTC at CCNY and received a commission as an Army second lieutenant upon graduation in June 1958. His further academic achievements include a Master of Business Administration degree from George Washington University.

Powell was a professional soldier for 35 years, during which time he held myriad command and staff positions and rose to the rank of 4-star General. His last assignment, from October 1, 1989 to September 30, 1993, was as the 12th Chairman of the Joint Chiefs of Staff, the highest military position in the Department of Defense.

During this time, he oversaw 28 crises, including Operation Desert Storm in the 1991 Persian Gulf War. He also formulated the Powell Doctrine.

Following his military retirement, Powell wrote his best-selling autobiography, My American Journey. In addition, he pursued a career as a public speaker, addressing audiences across the country and abroad. Prior to his appointment as Secretary of State, Powell was the chairman of America's Promise - The Alliance for Youth, a national nonprofit organization dedicated to mobilizing people from every sector of American life to build the character and competence of young people.

Powell is the recipient of numerous U.S. and foreign military awards and decorations. Powell's civilian awards include two Presidential Medal of Freedom, the President's Citizens Medal, the Congressional Gold Medal, the Secretary of State Distinguished Service Medal, and the Secretary of Energy Distinguished Service Medal.     Several schools and other institutions have been named in his honor and he holds honorary degrees from universities and colleges across the country. Powell is married to the former Alma Vivian Johnson of Birmingham, Alabama. The Powell family includes son Michael (ex-chairman of the Federal Communications Commission); daughters Linda and Anne; daughter-in-law Jane; and grandsons Jeffrey and Bryan.

In 2016, while not a candidate, Powell received three electoral votes for the office of President of the United States.

Powell's civilian awards include two Presidential Medals of Freedom (the second with distinction), the President's Citizens Medal, the Congressional Gold Medal, the Secretary of State Distinguished Service Medal, the Secretary of Energy Distinguished Service Medal, and the Ronald Reagan Freedom Award. Several schools and other institutions have been named in his honor and he holds honorary degrees from universities and colleges across the country.