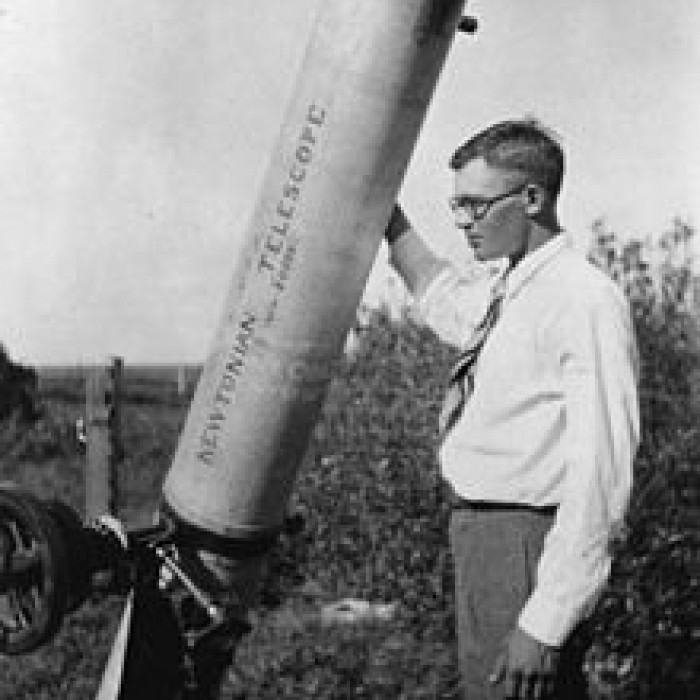 He discovered Pluto in 1930, the first object to be discovered in what would later be identified as the Kuiper belt.

At the time of discovery, Pluto was considered a planet but was later reclassified as a dwarf planet.

Tombaugh also discovered many asteroids. He also called for the serious scientific research of unidentified flying objects, or UFOs.

Tombaugh was born in Streator, Illinois, son of Muron Dealvo Tombaugh, a farmer, and his wife Adella Pearl Chritton.

After his family moved to Burdett, Kansas in 1922, Tombaugh's plans for attending college were frustrated when a hailstorm ruined his family's farm crops.

Starting in 1926, he built several telescopes with lenses and mirrors by himself.

To better test his telescope mirrors, Tombaugh, with just a pick and shovel, dug a pit 24 feet long, 8 feet deep, and 7 feet wide.

He sent drawings of Jupiter and Mars to the Lowell Observatory, which offered him a job. Tombaugh worked there from 1929 to 1945.

Following his discovery of Pluto, Tombaugh earned bachelor's and master's degrees in astronomy from the University of Kansas in 1936 and 1938.

He worked at White Sands Missile Range in the early 1950s, and taught astronomy at New Mexico State University from 1955 until his retirement in 1973.

He discovered hundreds of asteroids, beginning with 2839 Annette in 1929, mostly as a by-product of his search for Pluto and his searches for other celestial objects.

The Royal Astronomical Society awarded him the Jackson-Gwilt Medal in 1931.

In 1980, he wrote a book "Out of the Darkness:The Planet Pluto" with Patrick Moore.

Following the passage on July 14, 2015 of Pluto by the New Horizons spacecraft the "Cold Heart of Pluto" was named Tombaugh Regio.

Tombaugh was an active Unitarian-Universalist, and he and his wife helped found the Unitarian Universalist Church of Las Cruces, New Mexico.

While a young researcher working for the Lowell Observatory in Flagstaff, Arizona, Tombaugh was given the job to perform a systematic search for a trans-Neptunian planet (also called Planet X), which had been predicted by Percival Lowell and William Pickering.

Following the discovery, starting in the 1990s, of other Kuiper belt objects, Pluto began to be seen not as a planet orbiting alone at 40 AU, but as the largest of a group of icy bodies in that region of space.

Tombaugh continued searching for some years after the discovery of Pluto, and the lack of further discoveries left him satisfied that no other object of a comparable apparent magnitude existed near the ecliptic.

Tombaugh is officially credited by the Minor Planet Center with discovering 15 asteroids, and he observed nearly 800 asteroids during his search for Pluto and years of follow-up searches looking for another candidate for the postulated Planet X.

Tombaugh is also credited with the discovery of periodic comet 274P/Tombaugh–Tenagra.

He also discovered hundreds of variable stars, as well as star clusters, galaxy clusters, and a galaxy supercluster.

Tombaugh was probably the most eminent astronomer to have reported seeing unidentified flying objects and to support the extraterrestrial hypothesis.