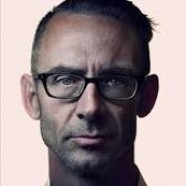 Charles Michael "Chuck" Palahniuk (February 21, 1962) is an American novelist and freelance journalist, who describes his work as transgressional fiction. He is the author of the award-winning novel Fight Club, which also was made into an acclaimed film of the same name.

Palahniuk began writing fiction in his mid-30s. By his account, he started writing while attending workshops for writers that were hosted by Tom Spanbauer, which he attended to meet new friends. Spanbauer largely inspired Palahniuk's minimalistic writing style.

Palahniuk's books prior to Lullaby have distinct similarities. The characters are people who have been marginalized in one way or another by society, and often react with self-destructive aggressiveness. He labels these stories as transgressional fiction. Beginning with Lullaby, the style of his novels changed to mostly satirical horror stories.

Palahniuk has won the following awards: