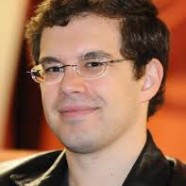 Christopher James Paolini (born November 17, 1983, Los Angeles, California) is an American author. He is best known as the author of the Inheritance Cycle, which consists of the books Eragon, Eldest, Brisingr and Inheritance. He currently lives in Paradise Valley, Montana, where he wrote his first book.

In 2002, Eragon was published for the first time by Paolini International LLC, Paolini's parents' publishing company. To promote the book, Paolini toured over 135 schools and libraries, discussing reading and writing, all the while dressed in "a medieval costume of red shirt, billowy black pants, lace-up boots, and a jaunty black cap." He drew the cover art for the first edition of Eragon, which featured Saphira's eye, along with the maps on the inside covers of his books.