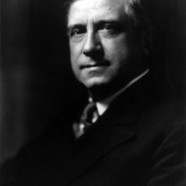 After graduating from high school in 1880, Schwab went to work for Carnegie Steel as a "stake driver" in a mill. Within six months he had gone from unskilled labor to assistant plant manager, in 1887 he was superintendent of Carnegie's Homestead Works and president of Carnegie Steel ten years later. Schwab, no relationship to the discount stock brokerage firm, was the liaison between Carnegie and J. P. Morgan in the creation of U. S. Steel Corp in 1901 and then served as that firm's first president. Personality conflicts led him to leave three years later at which point he took over Bethlehem Steel, where he became known for motivating his workforce. He gambled on creating the H-Beam for construction in 1908, which made the modern high-rise building possible and put Bethlehem in first place in the industry.