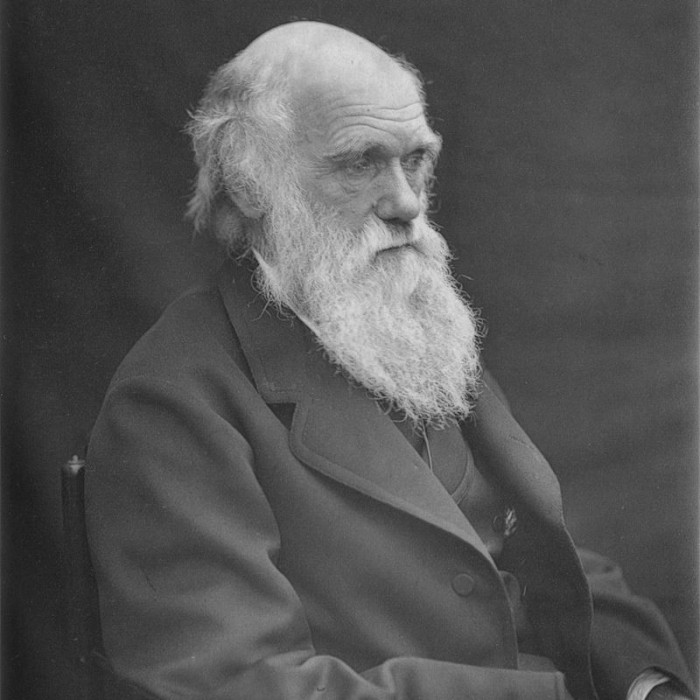 Charles Robert Darwin (12 February 1809 – 19 April 1882) was an English naturalist and geologist best known for his contributions to the science of evolution.

He established that all species of life have descended over time from common ancestors, and in a joint publication with Alfred Russel Wallace introduced his scientific theory that this branching pattern of evolution resulted from a process that he called natural selection.

Darwin published his theory of evolution with compelling evidence in his 1859 book On the Origin of Species, overcoming scientific rejection of earlier concepts of transmutation of species.

In modified form, Darwin's scientific discovery is the unifying theory of the life sciences, explaining the diversity of life.

Darwin's early interest in nature led him to neglect his medical education at the University of Edinburgh; instead, he helped to investigate marine invertebrates.

Studies at the University of Cambridge (Christ's College) encouraged his passion for natural science.

His five-year voyage on HMS Beagle established him as an eminent geologist whose observations and theories supported Charles Lyell's uniformitarian ideas, and publication of his journal of the voyage made him famous as a popular author.

Puzzled by the geographical distribution of wildlife and fossils he collected on the voyage, Darwin began detailed investigations and in 1838 conceived his theory of natural selection.

Although he discussed his ideas with several naturalists, he needed time for extensive research and his geological work had priority.

Darwin's work established evolutionary descent with modification as the dominant scientific explanation of diversification in nature.

His research on plants was published in a series of books, and in his final book, The Formation of Vegetable Mould, through the Actions of Worms (1881), he examined earthworms and their effect on soil.

Darwin has been described as one of the most influential figures in human history, and he was honoured by burial in Westminster Abbey.

Charles Robert Darwin was born in Shrewsbury, Shropshire, on 12 February 1809, at his family's home, The Mount.

The eight-year-old Charles already had a taste for natural history and collecting when he joined the day school run by its preacher in 1817.

Darwin spent the summer of 1825 as an apprentice doctor, helping his father treat the poor of Shropshire, before going to the University of Edinburgh Medical School (at the time the best medical school in the UK) with his brother Erasmus in October 1825.

He wrote his first paper, showing that the South American landmass was slowly rising, and with Lyell's enthusiastic backing read it to the Geological Society of London on 4 January 1837.

On 29 January, Darwin and Emma Wedgwood were married at Maer in an Anglican ceremony arranged to suit the Unitarians, then immediately caught the train to London and their new home.

On the Origin of Species proved unexpectedly popular, with the entire stock of 1,250 copies oversubscribed when it went on sale to booksellers on 22 November 1859.

In the book, Darwin set out "one long argument" of detailed observations, inferences and consideration of anticipated objections.

Darwinism became a movement covering a wide range of evolutionary ideas. In 1863 Lyell's Geological Evidences of the Antiquity of Man popularised prehistory, though his caution on evolution disappointed Darwin.

In 1882 he was diagnosed with what was called "angina pectoris" which then meant coronary thrombosis and disease of the heart. At the time of his death, the physicians diagnosed "anginal attacks", and "heart-failure".

He died at Down House on 19 April 1882. His last words were to his family, telling Emma "I am not the least afraid of death – Remember what a good wife you have been to me – Tell all my children to remember how good they have been to me".

Darwin had convinced most scientists that evolution as descent with modification was correct, and he was regarded as a great scientist who had revolutionised ideas.

He was honoured in June 1909 by more than 400 officials and scientists from across the world who met in Cambridge to commemorate his centenary and the fiftieth anniversary of On the Origin of Species.

During this period, which has been called "the eclipse of Darwinism", scientists proposed various alternative evolutionary mechanisms which eventually proved untenable.

Darwin's fame and popularity led to his name being associated with ideas and movements that, at times, had only an indirect relation to his writings, and sometimes went directly against his express comments.