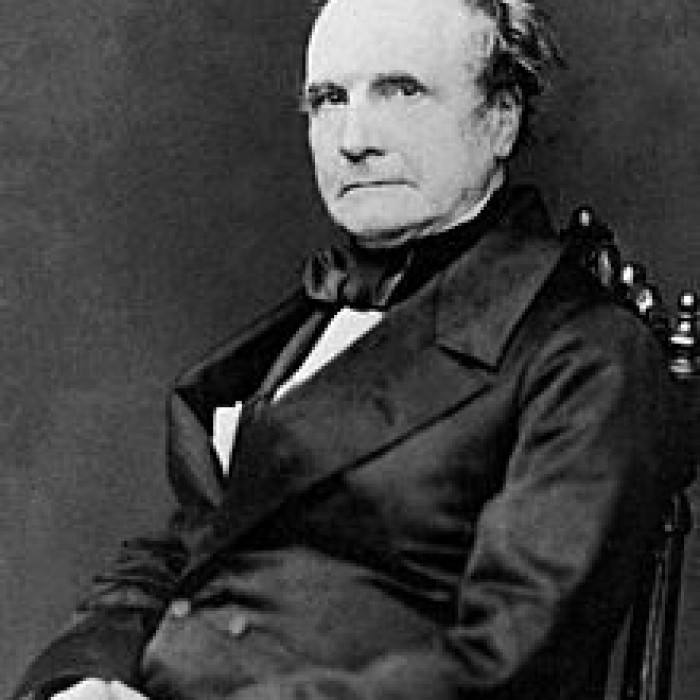 A mathematician, philosopher, inventor and mechanical engineer, Babbage is best remembered for originating the concept of a digital programmable computer.

Considered by some to be a "father of the computer", Babbage is credited with inventing the first mechanical computer that eventually led to more complex electronic designs, though all the essential ideas of modern computers are to be found in Babbage's analytical engine.

His varied work in other fields has led him to be described as "pre-eminent" among the many polymaths of his century.

Parts of Babbage's uncompleted mechanisms are on display in the Science Museum in London.

In 1991, a perfectly functioning difference engine was constructed from Babbage's original plans.

Babbage's birthplace is disputed, but according to the Oxford Dictionary of National Biography he was most likely born at 44 Crosby Row, Walworth Road, London, England.

His date of birth was given in his obituary in The Times as 26 December 1792; but then a nephew wrote to say that Babbage was born one year earlier, in 1791.

Babbage was one of four children of Benjamin Babbage and Betsy Plumleigh Teape. His father was a banking partner of William Praed in founding Praed's & Co. of Fleet Street, London, in 1801.

Babbage arrived at Trinity College, Cambridge, in October 1810. He was already self-taught in some parts of contemporary mathematics.

As a student, Babbage was also a member of other societies such as The Ghost Club, concerned with investigating supernatural phenomena, and the Extractors Club, dedicated to liberating its members from the madhouse, should any be committed to one.

He lectured to the Royal Institution on astronomy in 1815, and was elected a Fellow of the Royal Society in 1816.

With Herschel, Babbage worked on the electrodynamics of Arago's rotations, publishing in 1825. Their explanations were only transitional, being picked up and broadened by Michael Faraday.

The phenomena are now part of the theory of eddy currents, and Babbage and Herschel missed some of the clues to unification of electromagnetic theory, staying close to Ampère's force law.

During this whole period Babbage depended awkwardly on his father's support, given his father's attitude to his early marriage, of 1814: he and Edward Ryan wedded the Whitmore sisters. He made a home in Marylebone in London, and founded a large family.

Babbage was instrumental in founding the Astronomical Society in 1820. Its initial aims were to reduce astronomical calculations to a more standard form, and to circulate data.

In 1816 Babbage, Herschel and Peacock published a translation from French of the lectures of Sylvestre Lacroix, which was then the state-of-the-art calculus textbook.

From 1828 to 1839 Babbage was Lucasian Professor of Mathematics at Cambridge. Not a conventional resident don, and inattentive to teaching, he wrote three topical books during this period of his life.

He was elected a Foreign Honorary Member of the American Academy of Arts and Sciences in 1832.

Babbage now emerged as a polemicist. One of his biographers notes that all his books contain a "campaigning element".

Babbage published On the Economy of Machinery and Manufactures (1832), on the organisation of industrial production. It was an influential early work of operational research.

In Economy of Machinery was described what is now called the "Babbage principle". It pointed out commercial advantages available with more careful division of labour.

Babbage was raised in the Protestant form of the Christian faith, his family having inculcated in him an orthodox form of worship.

In 1838, Babbage invented the pilot (also called a cow-catcher), the metal frame attached to the front of locomotives that clears the tracks of obstacles; he also constructed a dynamometer car.

As early as 1845, Babbage had solved a cipher that had been posed as a challenge by his nephew Henry Hollier, and in the process, he made a discovery about ciphers that were based on Vigenère tables.

Babbage's machines were among the first mechanical computers. That they were not actually completed was largely because of funding problems and clashes of personality, most notably with Airy, the Astronomer Royal.

In Babbage's time, printed mathematical tables were calculated by human computers; in other words, by hand. They were central to navigation, science and engineering, as well as mathematics.

Babbage began in 1822 with what he called the difference engine, made to compute values of polynomial functions. It was created to calculate a series of values automatically.

Babbage lived and worked for over 40 years at 1 Dorset Street, Marylebone, where he died, at the age of 79, on 18 October 1871; he was buried in London's Kensal Green Cemetery.