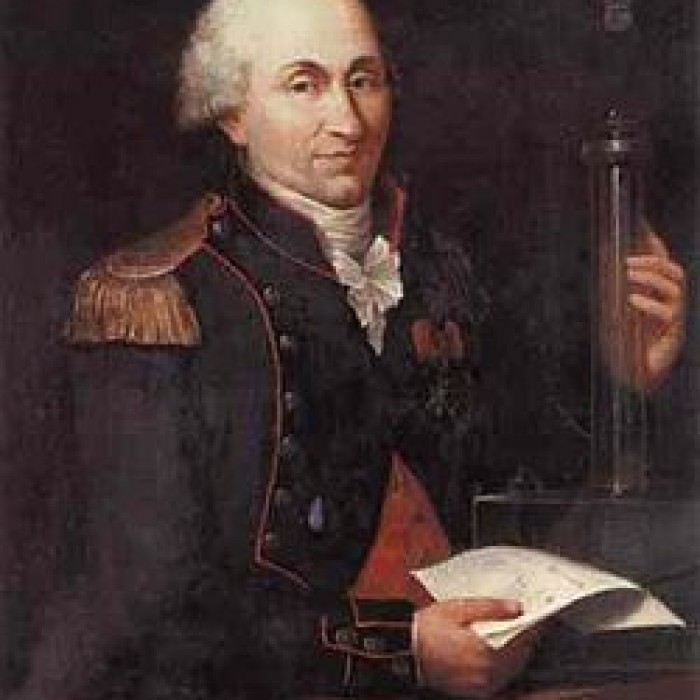 He was best known for developing Coulomb's law, the definition of the electrostatic force of attraction and repulsion, but also did important work on friction.

The SI unit of electric charge, the coulomb, was named after him.

Charles Augustin de Coulomb was born in Angoulême in France. He was born in a small home near France de Revone where he was raised for 7 years before beginning his education.

He went to school in the Collège Mazarin in Paris where his father lived. His studies included philosophy, language and literature. He also received a good education in mathematics, astronomy, chemistry and botany.

Over the next twenty years, he was posted to a variety of locations where he was involved in engineering - structural, fortifications, soil mechanics, as well as other fields of engineering.

His first posting was to Brest but in February 1764 he was sent to Martinique, in the West Indies, where he was put in charge of building the new Fort Bourbon and this task occupied him until June 1772.

On his return to France, Coulomb was sent to Bouchain. However, he now began to write important works on applied mechanics and he presented his first work to the Académie des Sciences in Paris in 1773.

During his period at Rochefort, Coulomb carried on his research into mechanics, in particular using the shipyards in Rochefort as laboratories for his experiments.

Upon his return to France, with the rank of Captain, he was employed at La Rochelle, the Isle of Aix and Cherbourg.

He discovered first an inverse relationship of the force between electric charges and the square of its distance and then the same relationship between magnetic poles. Later these relationships were named after him as Coulomb's law.

On the outbreak of the Revolution in 1789, he resigned his appointment as intendant des eaux et fontaines and retired to a small estate which he possessed at Blois.

He became one of the first members of the French National Institute and was appointed inspector of public instruction in 1802. His health was already very feeble and four years later he died in Paris.

Coulomb leaves a legacy as a pioneer in the field of geotechnical engineering for his contribution to retaining wall design. His name is one of the 72 names inscribed on the Eiffel Tower.

Coulomb explained the laws of attraction and repulsion between electric charges and magnetic poles, although he did not find any relationship between the two phenomena.

In 1785, Coulomb presented his first three reports on Electricity and Magnetism.

This memoir contained the results of Coulomb's experiments on the torsional force for metal wires, specifically within a torsion balance.