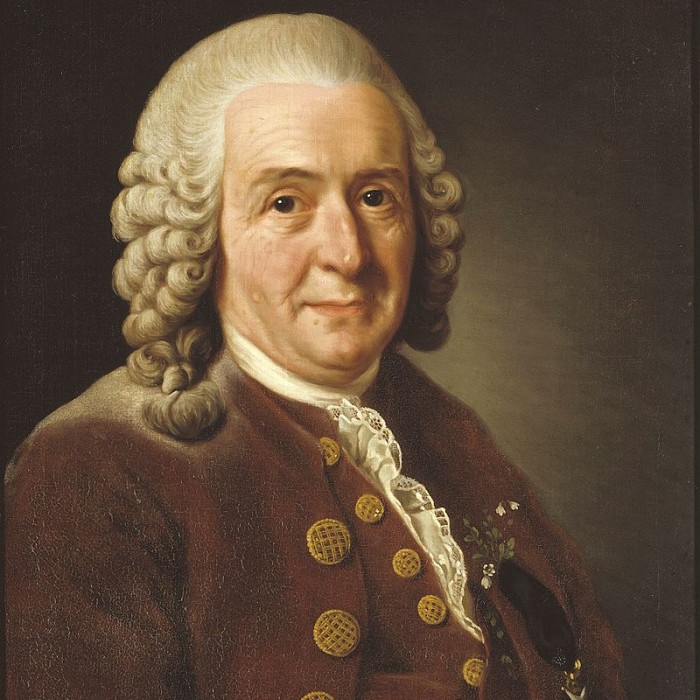 Carl Linnaeus ( 23 May 1707 – 10 January 1778), also known after his ennoblement as Carl von Linne was a Swedish botanist, physician, and zoologist.

He is known by the epithet "father of modern taxonomy". Many of his writings were in Latin, and his name is rendered in Latin as Carolus Linnæus (after 1761 Carolus a Linne).

Linnæus was born in the village of Råshult in Småland, Sweden, on 23 May 1707. He was the first child of Nicolaus (Nils) Ingemarsson and Christina Brodersonia.

He received most of his higher education at Uppsala University, and began giving lectures in botany there in 1730.

He lived abroad between 1735 and 1738, where he studied and also published a first edition of his Systema Naturae in the Netherlands.

He then returned to Sweden, where he became professor of medicine and botany at Uppsala.

In the 1740s, he was sent on several journeys through Sweden to find and classify plants and animals. In the 1750s and 1760s, he continued to collect and classify animals, plants, and minerals, and published several volumes.

A year after Linnæus' birth, his grandfather Samuel Brodersonius died, and his father Nils became the rector of Stenbrohult. The family moved into the rectory from the curate's house.

Linnaeus began his expedition from Uppsala on May 12, 1732, just before he turned 25. He travelled on foot and horse, bringing with him his journal, botanical and ornithological manuscripts and sheets of paper for pressing plants.

Linnaeus travelled clockwise around the coast of the Gulf of Bothnia, making major inland incursions from Umeå, Luleå and Tornio.

Linnaeus became acquainted with one of the most respected physicians and botanists in the Netherlands, Herman Boerhaave, who tried to convince Linnaeus to make a career there.

When Linnaeus returned to Sweden on 28 June 1738, he went to Falun, where he entered into an engagement to Sara Elisabeth Moræa.

During this time in Stockholm, Linnaeus helped found the Royal Swedish Academy of Science; he became the first Praeses in the academy by drawing of lots.

Because his finances had improved and were now sufficient to support a family, he received permission to marry his fiancée, Sara Elisabeth Moræa. Their wedding was held 26 June 1739.

In May 1741, Linnaeus was appointed Professor of Medicine at Uppsala University, first with responsibility for medicine-related matters.

In 1750, Linnaeus became rector of Uppsala University, starting a period where natural sciences were esteemed.

Linnaeus published Philosophia Botanica in 1751. The book contained a complete survey of the taxonomy system he had been using in his earlier works.

Linnaeus' last years were troubled by illness. He had suffered from a disease called the Uppsala fever in 1764, but survived thanks to the care of Rosén.

In December 1777, he had another stroke which greatly weakened him, and eventually led to his death on 10 January 1778 in Hammarby.

The establishment of universally accepted conventions for the naming of organisms was Linnaeus' main contribution to taxonomy—his work marks the starting point of consistent use of binomial nomenclature.