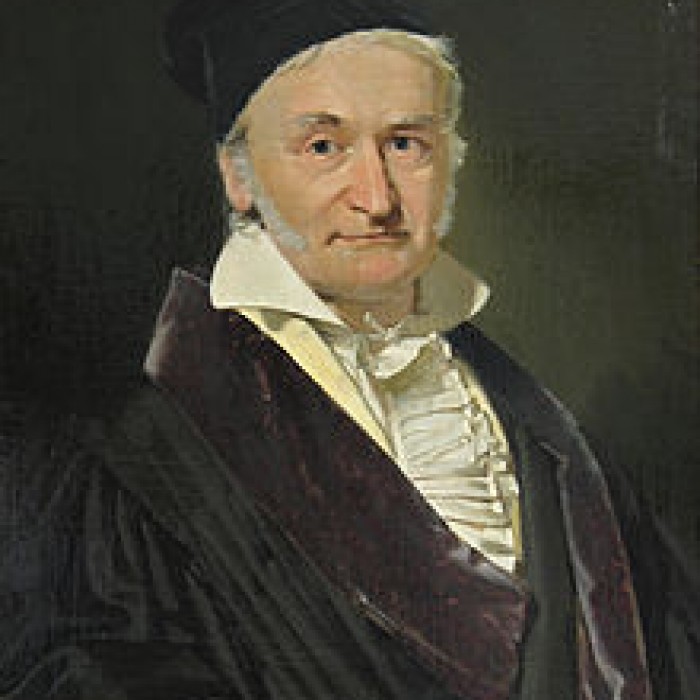 Gauss had an exceptional influence in many fields of mathematics and science and is ranked as one of history's most influential mathematicians.

Johann Carl Friedrich Gauss was born on 30 April 1777 in Brunswick (Braunschweig), in the Duchy of Brunswick-Wolfenbuttel, as the son of poor working-class parents.

His mother was illiterate and never recorded the date of his birth, remembering only that he had been born on a Wednesday, eight days before the Feast of the Ascension, which itself occurs 39 days after Easter.

Gauss later solved this puzzle about his birthdate in the context of finding the date of Easter, deriving methods to compute the date in both past and future years.

He was christened and confirmed in a church near the school he attended as a child.

Gauss was a child prodigy. A contested story relates that, when he was eight, he figured out how to add up all the numbers from 1 to 100.

Gauss's intellectual abilities attracted the attention of the Duke of Brunswick, who sent him to the Collegium Carolinum, which he attended from 1792 to 1795, and to the University of Göttingen from 1795 to 1798.

While at university, Gauss independently rediscovered several important theorems. His breakthrough occurred in 1796 when he showed that a regular polygon can be constructed by compass and straightedge if and only if the number of sides is the product of distinct Fermat primes and a power of 2.

The year 1796 was most productive for both Gauss and number theory. He discovered a construction of the heptadecagon on 30 March.

Gauss also discovered that every positive integer is representable as a sum of at most three triangular numbers on 10 July and then jotted down in his diary the note: "ΕΥΡΗΚΑ! num = Δ + Δ' + Δ".

On October 1 he published a result on the number of solutions of polynomials with coefficients in finite fields, which 150 years later led to the Weil conjectures.

Gauss proved the fundamental theorem of algebra which states that every non-constant single-variable polynomial with complex coefficients has at least one complex root.

Gauss's method involved determining a conic section in space, given one focus (the Sun) and the conic's intersection with three given lines and given the time it takes the planet to traverse the arcs determined by these lines.

The discovery of Ceres led Gauss to his work on a theory of the motion of planetoids disturbed by large planets, eventually published in 1809 as Theoria motus corporum coelestium in sectionibus conicis solem ambientum.

In 1818 Gauss, putting his calculation skills to practical use, carried out a geodetic survey of the Kingdom of Hanover, linking up with previous Danish surveys.

Gauss also claimed to have discovered the possibility of non-Euclidean geometries but never published it. This discovery was a major paradigm shift in mathematics.

In 1831 Gauss developed a fruitful collaboration with the physics professor Wilhelm Weber, leading to new knowledge in magnetism and the discovery of Kirchhoff's circuit laws in electricity.

In 1840, Gauss published his influential Dioptrische Untersuchungen, in which he gave the first systematic analysis on the formation of images under a paraxial approximation (Gaussian optics).

In 1845, he became associated member of the Royal Institute of the Netherlands; when that became the Royal Netherlands Academy of Arts and Sciences in 1851, he joined as a foreign member.

Gauss died in Göttingen, (then Kingdom of Hanover and now Lower Saxony) on 23 February 1855 and is interred in the Albani Cemetery there.

Carl Gauss was an ardent perfectionist and a hard worker. He was never a prolific writer, refusing to publish work which he did not consider complete and above criticism. This was in keeping with his personal motto pauca sed matura ("few, but ripe").