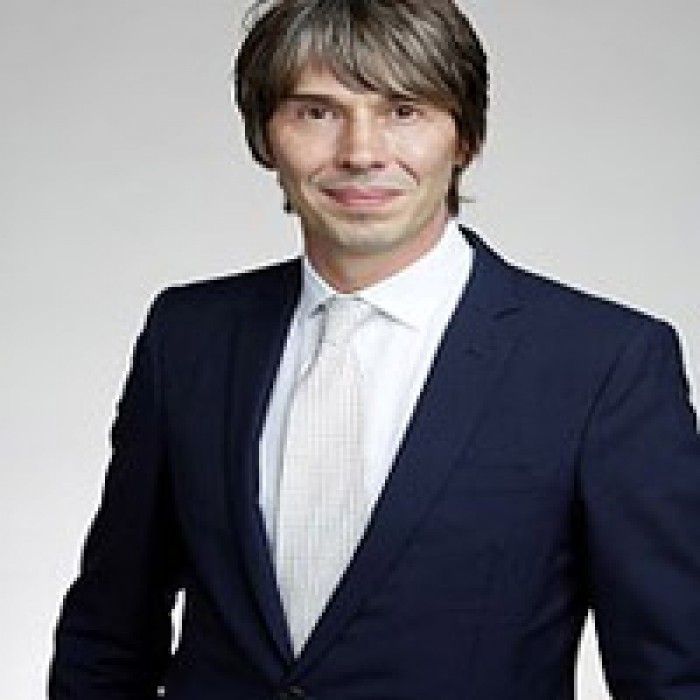 Brian Edward Cox (3 March 1968) is an English physicist, and Advanced Fellow of particle physics in the School of Physics and Astronomy at the University of Manchester.

He is best known to the public as the presenter of science programmes, especially the Wonders of... series and for popular science books, such as Why Does E=mc²? and The Quantum Universe.

He has been the author or co-author of over 950 scientific publications.

Cox has been described as the natural successor for BBC's scientific programming by both David Attenborough and the late Patrick Moore.

Before his academic career, Cox was a keyboard player for the bands D:Ream and Dare.

Cox was born in the Royal Oldham Hospital, later living in Chadderton, Oldham, from 1971.

In the 1980s, Cox was keyboard player with the rock band Dare. He joined D:Ream, a group that had several hits in the UK charts.

Cox studied physics at the University of Manchester during his music career. He earned a first-class Bachelor of Science degree and a Master of Philosophy degree in physics.

After D:Ream disbanded in 1997, he completed his Doctor of Philosophy in high-energy particle physics at the University of Manchester.

In 2003 Cox married U.S. science presenter Gia Milinovich in Duluth, Minnesota. Their first son, named George, was born on 26 May 2009.

Cox is a PPARC advanced fellow and member of the High energy physics group at the University of Manchester, and works on the ATLAS experiment at the Large Hadron Collider (LHC) at CERN, near Geneva, Switzerland.

Cox has co-authored several books on physics including Why does E=mc2? and The Quantum Universe, both with Jeff Forshaw.

Cox has appeared in many science programmes for BBC radio and television, including In Einstein's Shadow, the BBC Horizon series.

He co-presents Space Hoppers and has also featured in Dani's House on CBBC.

Cox has also appeared numerous times at TED, giving talks on the LHC and particle physics. In 2009 he appeared in People magazine's Sexiest Men Alive.

On 14 November 2013, BBC Two broadcast The Science of Doctor Who in celebration of Doctor Who's 50th anniversary, in which Cox tackles the mysteries of time travel.

Cox has received many awards for his efforts to publicise science. In 2002 he was elected an International Fellow of The Explorers Club and in 2006 he received the British Association's Lord Kelvin Award for this work.

In July 2012, Cox was awarded an honorary doctorate from the University of Huddersfield. He was elected a Fellow of the Royal Society (FRS) in 2016.