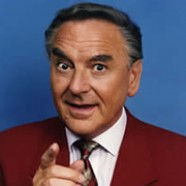 Bob Monkhouse was Britain's king of the quiz show, but this was just a part of a 50-year career in show business. While still at school, he wrote for the Beano and Dandy.

His family owned a custard factory, but after leaving school he decided to go into writing comedy material in a double-act with Denis Godwin for major Hollywood stars such as Bob Hope, Frank Sinatra, Dean Martin and Jerry Lewis. He worked in cabaret, performed in West End farces, acted on film and presented countless programmes.