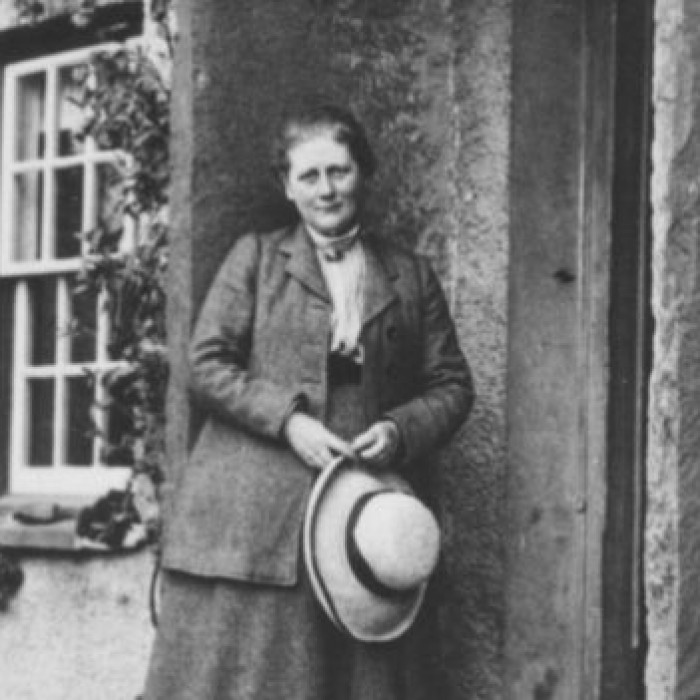 In 1905 Potter bought Hill Top Farm in Near Sawrey, a village in the Lake District, which at that time was in Lancashire.

In 1913, at the age of 47, she married William Heelis, a respected local solicitor from Hawkshead.

Potter was also a prize-winning breeder of Herdwick sheep and a prosperous farmer keenly interested in land preservation.

Potter wrote about 30 books; the best known being her 24 children's tales.

She died of pneumonia and heart disease on 22 December 1943 at her home in Near Sawrey at age 77, leaving almost all her property to the National Trust.

Potter's books continue to sell throughout the world in many languages with her stories being retold in song, film, ballet, and animation, and her life depicted in a feature film and television film.

Potter's paternal grandfather, Edmund Potter, from Glossop in Derbyshire, owned what was then the largest calico printing works in England, and later served as a member of parliament.

Beatrix's parents lived comfortably at 2 Bolton Gardens, West Brompton, where Helen Beatrix was born on 28 July 1866 and her brother Walter Bertram on 14 March 1872.

At about the age of 14, Beatrix began to keep a diary. It was written in a code of her own devising which was a simple letter for letter substitution.

Beatrix Potter was interested in every branch of natural science save astronomy. Botany was a passion for most Victorians and nature study was a popular enthusiasm.

Potter's artistic and literary interests were deeply influenced by fairies, fairy tales and fantasy. She was a student of the classic fairy tales of Western Europe.

In her teenage years, Potter was a regular visitor to the art galleries of London, particularly enjoying the summer and winter exhibitions at the Royal Academy in London.

As a way to earn money in the 1890s, Beatrix and her brother began to print Christmas cards of their own design, as well as cards for special occasions.

On 2 October 1902, The Tale of Peter Rabbit was published and was an immediate success.

Potter was also a canny businesswoman. As early as 1903, she made and patented a Peter Rabbit doll.

In 2006, Chris Noonan directed Miss Potter, a biographical film of Potter's life focusing on her early career and romance with her editor Norman Warne. Renée Zellweger and Ewan McGregor play the lead roles.