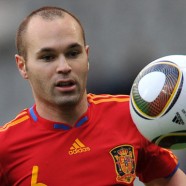 Andrés Iniesta Luján (Spanish pronunciation: born 11 May 1984) is a Spanish professional footballer who plays as a central midfielder for FC Barcelona and the Spain national team. He serves as the captain for Barcelona.

Iniesta came through La Masia, the Barcelona youth academy, after an early emigration from his birthplace, and impressed from an early age. He made his first-team debut in 2002, aged 18.

He began playing regularly during the 2004–05 season and has remained in the team ever since.

He was an integral part of the Barcelona team that won a historic six trophies in 2009, and his 32 trophies make him the most decorated Spanish footballer of all time.

Iniesta is considered to be one of the best players of his generation and one of the greatest midfielders of all time.