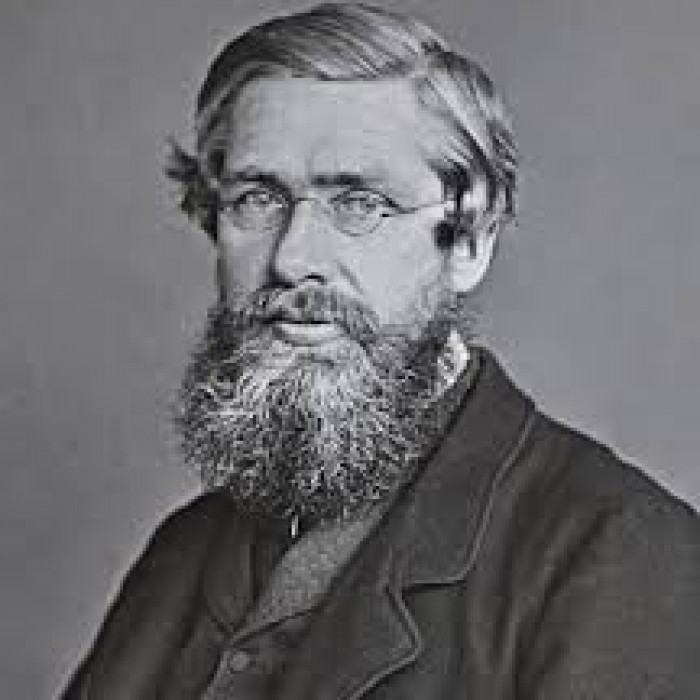 He is best known for independently conceiving the theory of evolution through natural selection; his paper on the subject was jointly published with some of Charles Darwin's writings in 1858.

He was considered the 19th century's leading expert on the geographical distribution of animal species and is sometimes called the "father of biogeography".

His advocacy of spiritualism and his belief in a non-material origin for the higher mental faculties of humans strained his relationship with some members of the scientific establishment.

Wallace had financial difficulties throughout much of his life. His Amazon and Far Eastern trips were supported by the sale of specimens he collected.

Alfred Wallace was born in the Welsh village of Llanbadoc, near Usk, Monmouthshire. He was the seventh of nine children of Thomas Vere Wallace and Mary Anne Greenell.

From 1854 to 1862, age 31 to 39, Wallace travelled through the Malay Archipelago or East Indies (now Singapore, Malaysia and Indonesia), to collect specimens for sale and to study natural history.

Wallace collected more than 126,000 specimens in the Malay Archipelago (more than 80,000 beetles alone). Several thousand of them represented species new to science.

In 1862, Wallace returned to England, where he moved in with his sister Fanny Sims and her husband Thomas.

Wallace had written only a handful of articles on political and social issues between 1873 and 1879 when, at the age of 56, he entered the debates over trade policy and land reform in earnest.

Wallace wrote on other social and political topics including his support for women's suffrage, and repeatedly on the dangers and wastefulness of militarism.

In 1898, Wallace published a book entitled The Wonderful Century: Its Successes and Its Failures about developments in the 19th century.

In 1872, at the urging of many of his friends, including Darwin, Philip Sclater, and Alfred Newton, Wallace began research for a general review of the geographic distribution of animals.

Wallace continued his scientific work in parallel with his social commentary. In 1880, he published Island Life as a sequel to The Geographic Distribution of Animals.

After the publication of Darwin's On the Origin of Species, Wallace became one of its staunchest defenders on his return to England in 1862.

In 1889, Wallace wrote the book Darwinism, which explained and defended natural selection.

On 7 November 1913, Wallace died at home in the country house he called Old Orchard, which he had built a decade earlier.