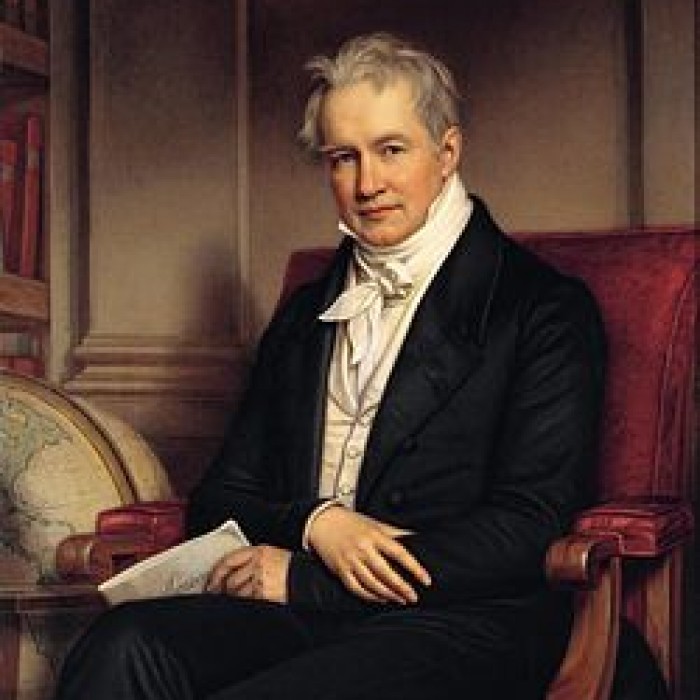 He was the younger brother of the Prussian minister, philosopher, and linguist Wilhelm von Humboldt (1767–1835).

Humboldt's quantitative work on botanical geography laid the foundation for the field of biogeography.

Between 1799 and 1804, Humboldt travelled extensively in Latin America, exploring and describing it for the first time from a modern scientific point of view.

Alexander von Humboldt was born in Berlin in Prussia on 14 September 1769. He was baptized as a baby in the Lutheran faith, with the Duke of Brunswick serving as godfather.

Humboldt graduated from the Freiberg School of Mines in 1792 and was appointed to a Prussian government position in the Department of Mines as an inspector in Bayreuth and the Fichtel mountains.

During his period as a mine inspector, Humboldt demonstrated his deep concern for the men laboring in the mines. He opened a free school for miners, paid for out of his own pocket, which became an unchartered government training school for labor.

Humboldt's researches into the vegetation of the mines of Freiberg led to the publication in Latin (1793) of his Florae Fribergensis, accedunt Aphorismi ex Doctrina, Physiologiae Chemicae Plantarum, which was a compendium of his botantical researches.

In 1794 Humboldt was admitted to the famous group of intellectuals and cultural leaders of Weimar Classicism. Goethe and Schiller were the key figures at the time.

In 1792 and 1797 Humboldt was in Vienna; in 1795 he made a geological and botanical tour through Switzerland and Italy.

In Madrid, Humboldt sought authorization to travel to Spain's realms in the Americas; he was aided in obtaining it by the German representative of Saxony at the royal Bourbon court.

When Humboldt requested authorization from the crown to travel to Spanish America, most importantly, with his own financing, it was given positive response. Spain under the Hapsburg monarchy had guarded its realms against foreigner travelers and intruders.

Armed with authorization from the King of Spain, Humboldt and Bonpland made haste to sail, taking the ship Pizarro from A Coruna, on 5 June 1799.

Humboldt visited the mission at Caripe and explored the Guácharo cavern, where he found the oilbird, which he was to make known to science as Steatornis caripensis.

In February 1800, Humboldt and Bonpland left the coast with the purpose of exploring the course of the Orinoco River and its tributaries.

On 24 November 1800, the two friends set sail for Cuba, landing on December 19, where they met fellow botanist and plant collectorJohn Fraser.

Humboldt and Bonpland had not intended to go to New Spain, but when they were unable to join a voyage via the Pacific, they left the Ecuador's port of Guayaquil, headed for Mexico's west coast port of Acapulco, landing February 15, 1803.

Humboldt came to be well-known with the reading public as well, with popular, densely illustrated, condensed versions of his work in multiple languages.

His discovery of the decrease in intensity of Earth's magnetic field from the poles to the equator was communicated to the Paris Institute in a memoir read by him on 7 December 1804.

During his lifetime Humboldt became one of the most famous men in Europe. He was elected to the Prussian Academy of Sciences in 1805.

On 24 February 1857, Humboldt suffered a minor stroke, which passed without perceptible symptoms; on 6 May 1859, he died peacefully in Berlin, aged 89.

Alexander von Humboldt published prolifically throughout his life. Many works were published originally in French or German, then translated to other languages.