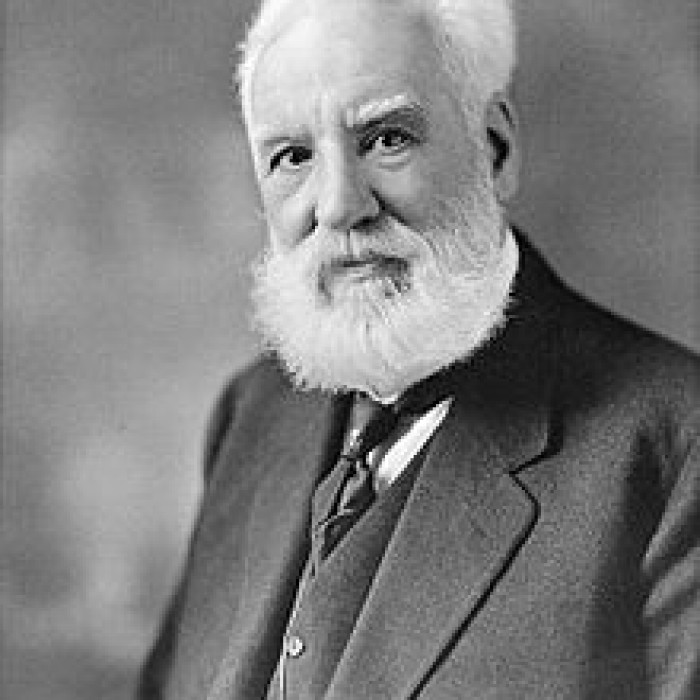 Alexander Graham Bell (March 3, 1847 – August 2, 1922) was a Scottish-born  scientist, inventor, engineer, and innovator who is credited with patenting the first practical telephone.

Bell's father, grandfather, and brother had all been associated with work on elocution and speech and both his mother and wife were deaf, profoundly influencing Bell's life's work. His research on hearing and speech further led him to experiment with hearing devices which eventually culminated in Bell being awarded the first U.S. patent for the telephone in 1876. Bell considered his most famous invention an intrusion on his real work as a scientist and refused to have a telephone in his study.

Many other inventions marked Bell's later life, including groundbreaking work in optical telecommunications, hydrofoils, and aeronautics. Although Bell was not one of the 33 founders of the National Geographic Society, he had a strong influence on the magazine while serving as the second president from January 7, 1898, until 1903.

Bell died of complications arising from diabetes on August 2, 1922, at his private estate in Cape Brenton, Nova Scotia, at age 75. Bell had also been afflicted with pernicious anemia.[195] His last view of the land he had inhabited was by moonlight on his mountain estate at 2:00 a.m.

While tending to him after his long illness, Mabel, his wife, whispered, "Don't leave me." By way of reply, Bell signed "no...", lost consciousness, and died shortly after.

“ My colleagues in the Government join with me in expressing to you our sense of the world's loss in the death of your distinguished husband. It will ever be a source of pride to our country that the great invention, with which his name is immortally associated, is a part of its history. On the behalf of the citizens of Canada, may I extend to you an expression of our combined gratitude and sympathy“

Bell's coffin was constructed of Beinn Bhreagh pine by his laboratory staff, lined with the same red silk fabric used in his tetrahedral kite experiments. To help celebrate his life, his wife asked guests not to wear black (the traditional funeral color) while attending his service, during which soloist Jean MacDonald sang a verse of Robert Louis Stevenson's "Requiem":

Under a wide and starry sky,

Dig the grave and let me lie.

Glad did I live and gladly die

And I laid me down with a will

Upon the conclusion of Bell's funeral, "every phone on the continent of North America was silenced in honor of the man who had given to mankind the means for direct communication at a distance".

Dr. Alexander Graham Bell was buried atop Beinn Bhreagh mountain, on his estate where he had resided increasingly for the last 35 years of his life, overlooking Bras d'Or Lake. He was survived by his wife Mabel, his two daughters, Elsie May and Marian, and nine of his grandchildren.