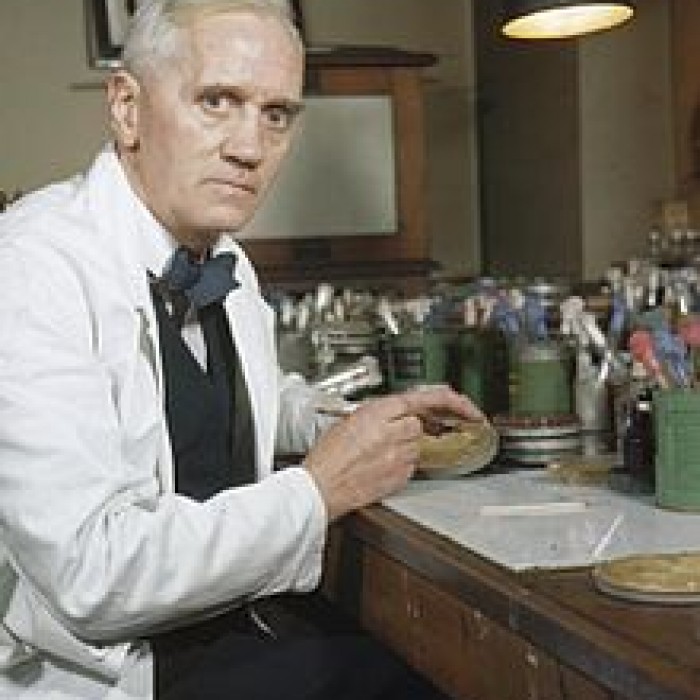 His best-known discoveries are the enzyme lysozyme in 1923 and the world's first antibiotic substance benzylpenicillin (Penicillin G) from the mould Penicillium notatum in 1928.

He shared the Nobel Prize in Physiology or Medicine in 1945 with Howard Florey and Ernst Boris Chain. He wrote many articles on bacteriology, immunology, and chemotherapy.

Fleming was knighted for his scientific achievements in 1944. In 1999, he was named in Time magazine's list of the 100 Most Important People of the 20th century.

In 2002, he was chosen in the BBC's television poll for determining the 100 Greatest Britons.

Alexander was born on 6 August 1881 at Lochfield farm near Darvel, in Ayrshire, Scotland.

Alexander was the third of the four children of farmer Hugh Fleming (1816–1888) from his second marriage to Grace Stirling Morton (1848–1928), the daughter of a neighbouring farmer.

During World War I, Fleming witnessed the death of many soldiers from sepsis resulting from infected wounds. Antiseptics, which were used at the time to treat infected wounds, often worsened the injuries.

In an article he submitted for the medical journal The Lancet during World War I, Fleming described an ingenious experiment, which he was able to conduct as a result of his own glass blowing skills, in which he explained why antiseptics were killing more soldiers than infection itself during World War I.

At St Mary’s Hospital Fleming continued his investigations into antibacterial substances. Testing the nasal secretions from a patient with a heavy cold, he found that nasal mucus had an inhibitory effect on bacterial growth.

He investigated its positive anti-bacterial effect on many organisms, and noticed that it affected bacteria such as staphylococci and many other Gram-positive pathogens that cause scarlet fever, pneumonia, meningitis and diphtheria, but not typhoid fever or paratyphoid fever, which are caused by Gram-negative bacteria, for which he was seeking a cure at the time.

Fleming published his discovery in 1929, in the British Journal of Experimental Pathology, but little attention was paid to his article.

Fleming continued his investigations, but found that cultivating penicillium was quite difficult, and that after having grown the mould, it was even more difficult to isolate the antibiotic agent.

Fleming's accidental discovery and isolation of penicillin in September 1928 marks the start of modern antibiotics.

His discovery of penicillin had changed the world of modern medicine by introducing the age of useful antibiotics; penicillin has saved, and is still saving, millions of people around the world.

The laboratory at St Mary's Hospital where Fleming discovered penicillin is home to the Fleming Museum, a popular London attraction.

His other alma mater, the Royal Polytechnic Institution (now the University of Westminster) has named one of its student halls of residence Alexander Fleming House, which is near to Old Street.

Fleming, Florey and Chain jointly received the Nobel Prize in Medicine in 1945.

On 11 March 1955, Fleming died at his home in London of a heart attack. He was buried in St Paul's Cathedral.