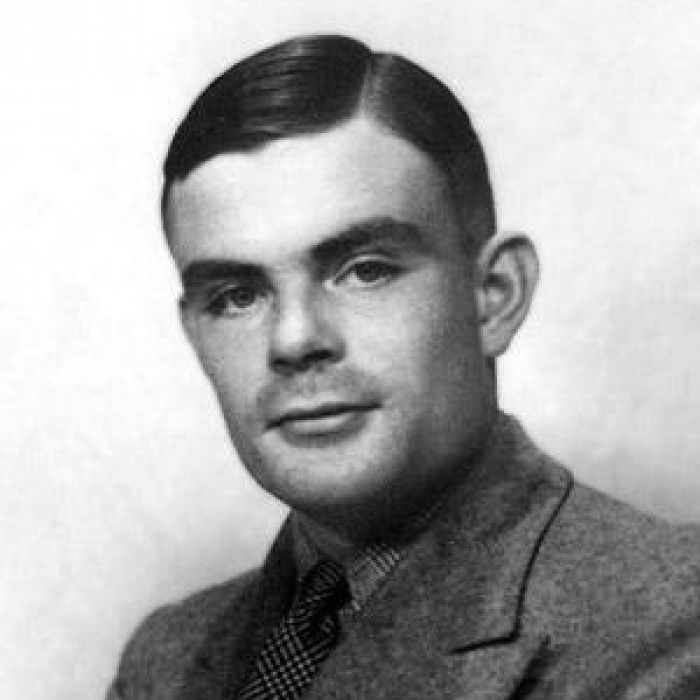 He was highly influential in the development of theoretical computer science, providing a formalization of the concepts of algorithm and computation with the Turing machine, which can be considered a model of a general purpose computer.

During the Second World War, Turing worked for the Government Code and Cypher School (GC&CS) at Bletchley Park, Britain's codebreaking centre. For a time he led Hut 8, the section responsible for German naval cryptanalysis.

After the war, he worked at the National Physical Laboratory, where he designed the ACE, among the first designs for a stored-program computer.

In 1948 Turing joined Max Newman's Computing Machine Laboratory at the Victoria University of Manchester, where he helped develop the Manchester computers and became interested in mathematical biology.

He wrote a paper on the chemical basis of morphogenesis, and predicted oscillating chemical reactions such as the Belousov–Zhabotinsky reaction, first observed in the 1960s.

Turing was born in Maida Vale, London, while his father, Julius Mathison Turing (1873–1947), was on leave from his position with the Indian Civil Service (ICS) at Chhatrapur, Bihar and Orissa Province, in British India.

Very early in life, Turing showed signs of the genius that he was later to display prominently. His parents purchased a house in Guildford in 1927, and Turing lived there during school holidays. The location is also marked with a blue plaque.

Turing formed a significant friendship with fellow pupil Christopher Morcom, who has been described as Turing's "first love". Their relationship provided inspiration in Turing's future endeavours, but it was cut short by Morcom's death, in February 1930, from complications of bovine tuberculosis, contracted after drinking infected cow's milk some years previously.

Turing studied as an undergraduate from 1931 to 1934 at King's College, Cambridge, where he gained first-class honours in mathematics. In 1935, at the age of 22, he was elected a fellow of King's on the strength of a dissertation in which he proved the central limit theorem. Unknown to the committee, the theorem had already been proven, in 1922, by Jarl Waldemar Lindeberg.

On 8 June 1954, Turing's housekeeper found him dead. He had died the previous day. A post-mortem examination established that the cause of death was cyanide poisoning.